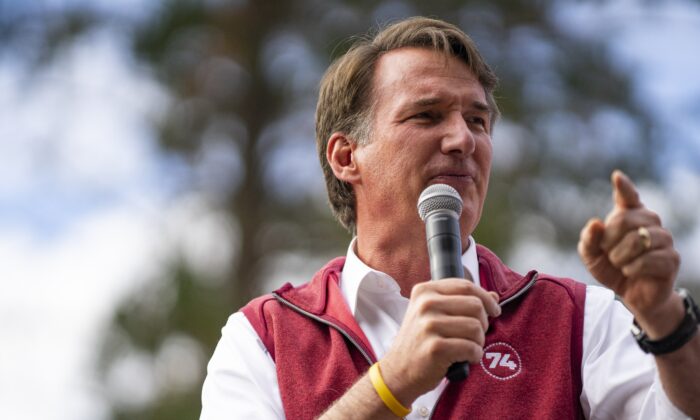 Virginia Gov. Glenn Youngkin responded to criticism from former President Donald Trump on Friday amid speculation the Republican governor might run for president in 2024.

Earlier in the day, Trump took aim at Youngkin, who won his election last year, saying that he “Endorsed him, did a very big Trump Rally for him telephonically, got MAGA to Vote for him—or he couldn’t have come close to winning.”

“Young Kin (now that’s an interesting take. Sounds Chinese, doesn’t it?) in Virginia couldn’t have won without me,” wrote Trump on Truth Social.

The former president has suggested he could again campaign for the White House in 2024. Trump teased that he’ll be making an announcement at his Mar-a-Lago residence next week, which some have said may be a presidential bid.

In response to Trump’s comment, Youngkin demurred and told reporters Friday that he “didn’t see it.”

“I’ve been busy all morning,” the Republican governor said, adding that “listen, I do not call people names” and “I work hard to bring people together.”

On Thursday, Virginia Lt. Gov. Winsome Sears, a Republican, told news outlets that she couldn’t support Trump if he made a third bid for president in 2024. “I could not support him. I just couldn’t,” said Sears, claiming that voters are saying “enough is enough” about Trump.

Other than Youngkin, Trump also took aim at Florida Gov. Ron DeSantis, who handily won his reelection bid in Florida on Tuesday night. There has been speculation the Republican governor would be making a bid for president in 2024, potentially setting up a clash between him and Trump.

“Ron DeSanctimonious is playing games,” the 45th president said in a statement released on Thursday, deriding the governor for sidestepping questions about a presidential run. “I think if he runs, he could hurt himself very badly. I really believe he could hurt himself badly,” Trump also told Fox News earlier this week.

Republicans have been blaming members of their own party, including Trump, Senate Republican Leader Mitch McConnell, and House Minority Leader Kevin McCarthy. But news outlets such as the New York Post, Fox News, the Washington Examiner, and the Daily Wire have chiefly targeted Trump and claimed he is dragging Republican candidates down.

But some top Republicans, including Rep. Elise Stefanik (R-N.Y.), a member of the House leadership, have publicly backed Trump’s 2024 bid. Rep. Marjorie Taylor Greene (R-Ga.), who won her reelection bid, also suggested that DeSantis should stay where he is in Florida because he’s a “strong Republican governor.”

DeSantis, so far, has not issued any public response to Trump. The Epoch Times has contacted his campaign for comment.