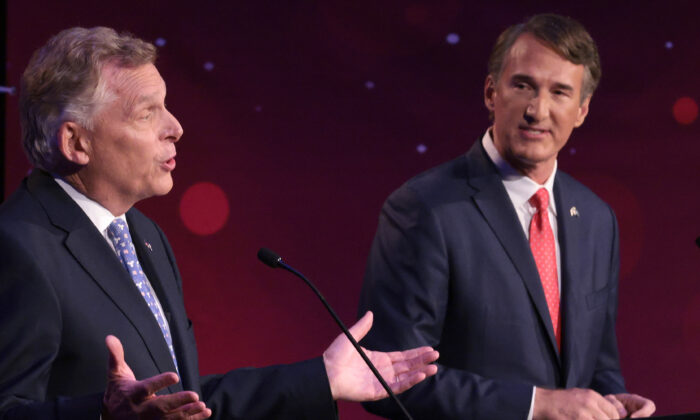 Virginia’s Democratic gubernatorial candidate Terry McAuliffe argued that parents should not tell schools what to teach, during the final debate before the upcoming Nov. 2 election.

The remark by McAuliffe, who served as governor of Virginia from 2014 to 2018, came after Republican candidate Glenn Youngkin said he believes that parents should be given more say in the decisions of local school districts, including what kind of books their children are exposed to at school.

“What we’ve seen over the course of this last 20 months is our school systems refusing to engage with parents,” Youngkin said. “In fact, in Fairfax County this past week, we watched parents so upset because there was such sexually explicit material in the library they had never seen, it was shocking.”

He then pointed out that McAuliffe in 2016 put down what was known as the “Beloved” bill, a measure that would have made Virginia the first state to require schools to warn parents of sexually explicit content in books, and allow parents to block their children from reading those books.

“You vetoed the bill that would have informed parents that they were there,” Youngkins said to the former governor. “You believe school systems should tell children what to do. I believe parents should be in charge of their kids’ education.”

In response, McAuliffe said that parents would have had the power to remove books from library shelves if the 2016 bill passed.

“It was not that the parents had the right to veto books … also take them off the shelves,” he said. “I’m not going to let parents come into schools and actually take books out and make their own decisions.”

“I stopped the bill and I don’t think parents should be telling schools what they should teach,” McAuliffe added.

The candaidates’ comments comes amid ongoing controversies around public education in Virginia, including the incorporation of critical race theory (CRT) in schools, and the Commonwealth’s new model policies encouraging school districts to allow transgender students to use restrooms and locker rooms that align with their gender identity.

McAuliffe during the first gubernatorial debate on Sept. 16 said individual school boards should be making their own decisions on whether to implement the model policies. Youngkin on Tuesday agreed with McAuliffe’s response, but added that parents should be included in the conversation, and that schools must consider “concepts of safety, privacy, and respect” when making decisions.

When it comes to CRT, McAuliffe reportedly dismissed the concerns as a “right-wing conspiracy” that was “totally made up by Donald Trump.” By contrast, Youngkin said the CRT is a real issue.

“Virginia schools are in a state of chaos because of the left-liberal, progressive agenda that is being ramrodded across the Commonwealth of Virginia,” Youngkin told The Epoch Times earlier this summer. “We kept our schools closed so unnecessarily, and damaged kids across Virginia. We have infused a political agenda of critical race theory into the curriculum, and we are seeing parents stand up across Virginia, and acutely in Loudon County.”