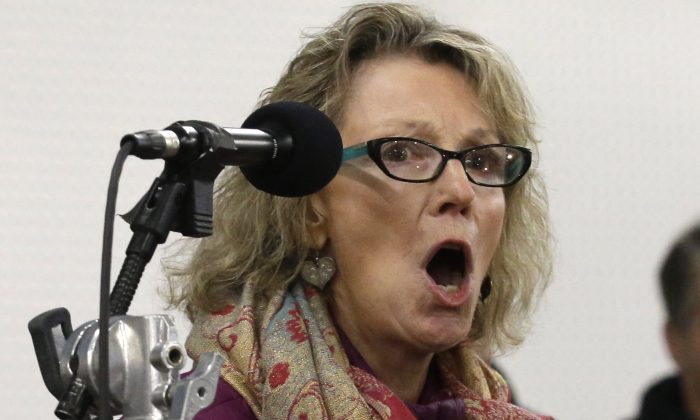 The armed group led by Ammon Bundy is holding its ground at the Malheir National Wildlife Refuge in Oregon, but locals aren’t happy.

At a county meeting called by Harney County Sheriff David Ward, numerous members of the community expressed frustration and anger at the militants.

At one point, Georgia Marshall stepped up to make some comments. The rancher has been described by one local as “the most soft-spoken person in town,” but she was fired up on this occasion.

Marshal, who has lived in the county for 64 years, said locals started working with federal officials to modernize the handling of federal lands, and sees the armed group as disrupting the progress they’ve made.

“The progress we’ve made in this community compared with the [expletive]we went through years ago when you could not stand in talk to a manager,” she told the crowd. “Granted, it’s not a lot of progress but it’s coming.”

She noted that the High Desert Partnership was leading the way for local residents.

She then urged residents “not to destroy everything we’re doing because we have to make a stand for everything in the god damn past.”

“Let’s try to keep going, let’s not get caught up like I’m pissed as hell right now. And my boots are shaking, but I’m proud to be a rancher and I’m not going to let some other people be my face! I am me! This is my home!”


The Guardian’s reporter at the meeting noted that the majority of residents want Bundy’s group to leave, but a few are supportive.

Mitch Stegner, one of them, told his neighbors that he’d been out to talk to the group and said they were polite. He told others to go visit as well.

“Whether you agree with them or not, those Bundys have given us our biggest and best platform to get our message to the federal government that they have to pay attention to us,” he said.

But in the end, the sheriff asked: “How many people want these people to leave?”