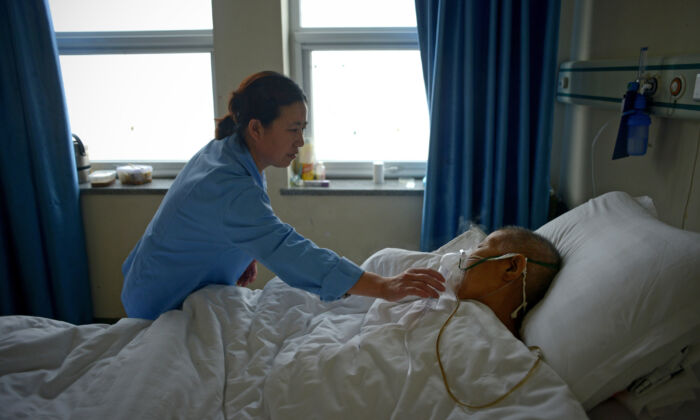 A man suffering from pneumonia receives treatment in a ward at Wang Fu Hospital in Beijing on December 9, 2015. (WANG ZHAO/AFP via Getty Images)
Social Issues

The outbreak of a mysterious pneumonia-like disease in central China’s Wuhan city has generated widespread alarm.

State-run media confirmed on Dec. 31, 2019, that 27 people from Wuhan city had contracted an “unknown viral pneumonia,” with patients reporting symptoms such as fever, having difficulty breathing, and invasive lesions in the lungs. Seven were in serious condition.

Authorities didn’t have any information about the cause of the infections.

According to state-run media Beijing News, the patients were vendors and shoppers at the Huanan Seafood Market, located close to Hankou Railway Station in the city’s Jianghan district. The market sells seafood and a variety of wild animal meats.

State media People’s Daily published a Dec. 30, 2019, directive from the Wuhan Health Commission that was sent to all medical facilities in the city, forbidding “any party or individual from publicizing medical information without permission.”

Chinese authorities quickly censored online discussions about the outbreak. On Jan. 1, Wuhan police stated that they detained eight locals who spread “rumors” that the viral pneumonia was SARS (severe acute respiratory syndrome). The epidemic in 2002–2003 killed hundreds of mainland Chinese. Due to authorities’ cover-up, the disease spread globally and led to more than 8,000 contracting the disease.

Meanwhile, the Hong Kong and Taiwan governments have stepped up measures to prevent the disease from spreading.

China commentators raised concerns that Chinese authorities’ lack of transparency about the illness could lead to patients unknowingly spreading the virus more broadly and cause another SARS-like epidemic.

On Dec. 31, 2019, state media reported that the 27 patients, who were being treated at different Wuhan hospitals, were all relocated to the Jinyintan Hospital in Dongxihu district, as it is a dedicated infectious diseases treatment center.

Family members said they weren’t allowed to visit the patients and could only bring food and drinks for hospital nurses to pass on.

The news has struck panic among Wuhan residents. Since Jan. 1, pharmacies in Wuhan were cleared of surgical masks, gas masks, over-the-counter preventive Chinese medicines, and banlangen, a Chinese medicine made of the root of isatis tinctoria. It is typically used to treat colds and mouth ulcers.

“People are scared of the unknown disease. They want to protect themselves [by purchasing such drugs],” a saleswoman at a Wuhan pharmacy told Beijing News on Jan. 1.

In 2002, the SARS virus was first discovered in southern China’s Guangdong Province.

It quickly spread to Hong Kong and then other countries, after Chinese authorities censored related information and patients traveled around the world without treatment or protection.

Chinese netizens expressed worries that the new “unknown viral” disease could spread quickly, as Wuhan is the largest transportation hub in China, owing to its geographic location in the center of the country.

People typically pass through Wuhan whenever they travel from north to south, or west to east, either by railway, highway, air, or water transportation.

Around the Chinese New Year, which lands on Jan. 25, many Chinese travel to their hometowns to celebrate the holiday. Every year, roughly 3 billion trips take place.

“The pathogens are unclear, and the way the disease spreads is unknown. If this unknown viral pneumonia is highly contagious, the virus can spread all across China within a few weeks,” Tang Jingyuan, a U.S.-based China affairs commentator and former doctor, told The Epoch Times on Jan. 2.

Furthermore, “the worst situation is the government wants to maintain its political stability and won’t tell people the truth,” Tang said.

He feared that if Beijing continues to censor related information, it could lead to another SARS-like outbreak.

On Jan. 2, Sophia Chan, Hong Kong’s health secretary, announced at a press conference that the government would take precautionary measures concerning the unknown pneumonia, including daily press briefings, and monitoring travelers who might be unwell at the airport and express rail terminals.

On Jan. 2, Chou Jih-Haw, director-general of Taiwan’s Centers for Disease Control, said at a press conference that a 6-year-old child who was onboard a flight to Taiwan and had transferred in Wuhan had come down with a fever. After the center’s investigation, it arranged for the child to stay home for further observation.