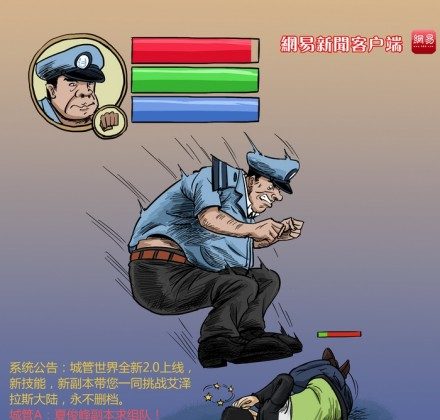 Chinese web portal NetEase created a computer game mocking a Yan'an "chengguan" officer who stomped on a man's head when the man tried to stop a group of officers from taking away the bicycles parked outside his bike shop. (Weibo.com)
China

Video of a Chinese urban police officer jumping onto the head of a bike shop owner went viral on the Chinese Internet this week, leading many to reflect on the culture of violence and abuse of power in Chinese society.

Chengguan (meaning “urban management” in Chinese) are known to most citizens for their often violent enforcement of city regulations. They particularly target street vendors and beggars.

In Yan’an City, Shaanxi Province, on May 31, a group of chengguan set upon a bike shop owner after he attempted to stop them from taking away bicycles parked outside his store. A bystander caught the scene on videotape and uploaded it online.

The shop owner and several bystanders told the People’s Daily that one of the officers reeked of alcohol, a claim that city authorities denied. On June 4, five chengguan involved in the incident were dismissed.

Netizens were outraged at the officers in Yan’an, calling them “thugs” and “a mafia organization that is supported by taxpayers.”

In the southern city of Guangzhou, Guangdong Province, street violence went the other way.

After a group of street vendors got into a dispute with chengguan on June 2, they proceeded to strip and then beat one of them, including attacking his genitals.

A bystander uploaded a photo of the incident onto Sina Weibo, a microblogging service, where it was then widely circulated and the story picked up by local media.

Opinion was divided on the treatment of the chengguan in Guangzhou. While many netizens said he deserved what he got, others suggested the two incidents reflected a larger social problem.

One popular blogger with the avatar “Pretending to Be in New York” and over 500,000 followers, posted: “I believe that between the chengguan in Yan’an who stomped on a city resident’s head and the chengguan in Guangzhou who was surrounded and attacked by city residents, there must exist a hidden and crooked line… Just like how the towering, magnificent government buildings and villages that had their land forcibly seized also have a connecting logic.”

He suggested that continued official violence could one day trigger a mass uprising.