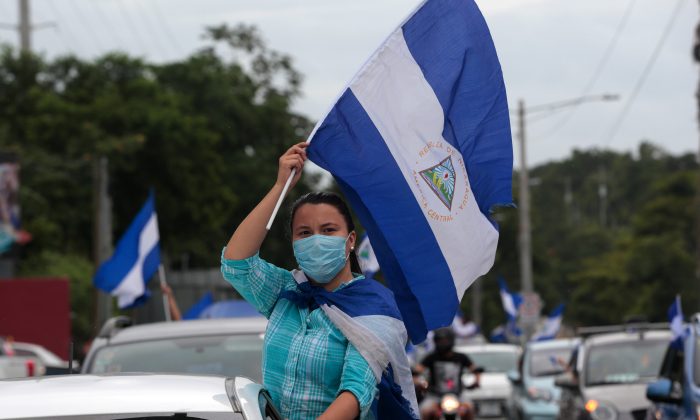 An anti-government protester takes part in a caravan of car and motorcycles to demand an end to violence in Ticuantepe, Nicaragua July 15, 2018.(Reuters/Oswaldo Rivas)
Americas

MANAGUA—Nicaraguan police and paramilitary groups loyal to President Daniel Ortega killed at least 10 people on Sunday, a human rights association said, as the death toll from violent clashes in the Central American country continues to rise.

The people were killed when government forces attacked the community of Monimbo and nearby city of Masaya, about 25 kilometers (16 miles) southeast of the capital, Managua, said Alvaro Leiva of the Nicaraguan Association for Human Rights.

“We are talking about more than 10 deaths at this time,” Leiva told a local television station.

The government could not immediately be reached for comment.

Nearly three months of clashes between pro-Ortega forces and demonstrators calling for his removal have claimed over 300 lives, in the bloodiest protests in Nicaragua since the country’s civil war ended in 1990.

On Saturday, bishops secured the release of dozens of student protesters trapped overnight inside a church under a hail of gunfire from armed pro-government supporters, who killed at least one person inside, a human rights group said.

Nicaragua has been convulsed by unrest since April, when Ortega, a former Marxist guerrilla leader, proposed reducing pension benefits to ease budgetary pressures.

Though the plan was later dropped, it provoked violent clashes and calls for Ortega to step down.

Student leader Lester Aleman, who is among the protesters spearheading the demand for Ortega to step down, told reporters that he wanted a “halt to the repression.”