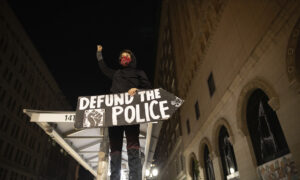 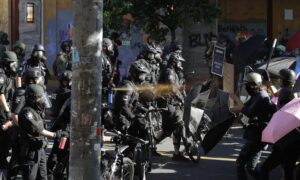 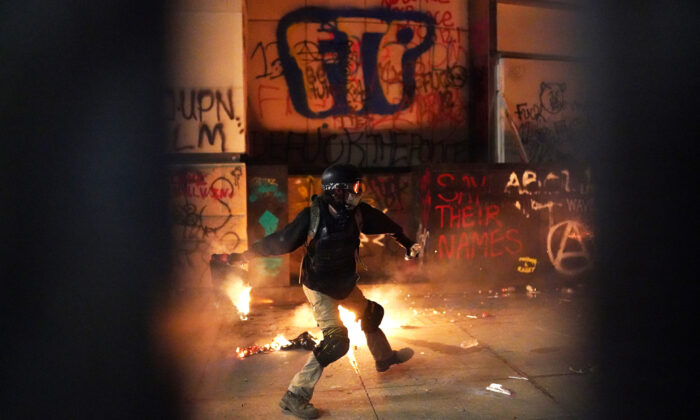 A rioter throws a flaming object toward the Mark O. Hatfield U.S. Courthouse after breaking through the perimeter fence, in Portland, Ore., on July 22, 2020. (Nathan Howard/Getty Images)
US News

Violence and Anarchy Reign in Portland

What awaits them inside the courthouse is a mix of agents from the Federal Protective Service, the U.S. Marshals Service, and U.S. Customs and Border Protection. They were sent to the city as reinforcements to protect federal buildings.

Amid banging drums and raucous cheers castigating law enforcement, some in the crowd attempt to agitate and escalate the scene further.

Night after night—now into its 59th and counting—officers face an onslaught of projectiles such as rocks, bottles, and bricks, as well as commercial fireworks (which can cause burns), according to the Portland Police Bureau. Rioters also bang against the protective barrier that surrounds most of the courthouse, sometimes using saws to cut through, other times using grappling hooks or rope to tear it down.

Federal agents also have to deal with rioters wielding high-powered green lasers that can blind, as well as fires being lit in front of the courthouse. In response, authorities use tear gas and other crowd-control munitions such as rubber bullets and pepper balls. Agents have also made a number of arrests (after multiple siren warnings.)

Rioters attempt to shine green laser pointers directly into the eyes of federal agents outside the courthouse. #PortlandRiots pic.twitter.com/8jXs2ddH9c

“We have three officers who currently have eye injuries, and they may not recover sight in those eyes from those laser attacks,” Federal Protective Service (FPS) Deputy Director of Operations Richard “Kriss” Cline said recently.

Protesters appear to coordinate on many fronts, one being the illegal blocking of roads in the vicinity with bikes and cars. Multiple vans with medical supplies and so-called medics are also on standby (usually located at the back of the protest), while other vans patrol the area providing free food and water.

“Whatever message they were going for is now lost to the violence that’s taking place every night,” said Fabian Gordon, a Portland business owner who witnessed the events unfolding firsthand at the protest on July 24.

Gordon said he was unhappy about the impact the unrest would have on the “economic future of this area.”

“I’m very concerned about what happens in a few months to my city when all this dies out—what’s left?” he said. “[It’s] obviously terrifying, and that’s the right word to use for it.”

During the day, protests are largely peaceful. But at night, it’s a different story, and the violence doesn’t appear to show any signs of abating. In recent weeks, Portland Police have reported stabbings and shootings that took place at or near the federal courthouse.

And on July 26, authorities found a bag pointed out to them by a passerby that contained “loaded rifle magazines and Molotov cocktails.” Police have recovered the bag and are currently investigating the origin of the materials.

“I think they are anarchists. They are the ones that are going to the fence throwing stuff over and setting fires. It’s making everybody look bad,” said Brad, who was born and raised in Portland and who has been protesting for over a week. He declined to provide his last name over privacy concerns.

“I’m 100 percent against them [rioters]; they are agitating the federal agents,” he told The Epoch Times on July 25.

“I kind of don’t blame them [federal agents] for throwing the flashbangs, but the stuff they use is insane.”

Most of the protesters are peaceful, according to him. Footage by The Epoch Times, meanwhile, shows the crowd cheering as commercial fireworks land against the courthouse, a signal that protesters support the violence, even if they don’t directly partake in it.

Brad criticized the law enforcement response as excessive, claiming, “We are no threat to them; they have all these high-tech gadgets; we have sticks and stones.”

Anti-police and pro-revolution graffiti runs rampant throughout the area surrounding the courthouse. One piece of graffiti explicitly states, “Kill a cop, save a life.” Footage also shows protesters themselves chanting: “It’s not a riot, it’s a revolution.”

Antifa flags, meanwhile have also been spotted at the riots.

Rioters shout: “This is not a riot, it’s a revolution.” pic.twitter.com/DQn5nTrkZT

Protesters have a number of demands. Some of them, which were projected into the Justice Center on July 22, include defunding the Portland Police by at least 50 percent, releasing all protesters from jail, and for all federal agents to leave the city.

“Yeah it was rowdy,” one protester told The Epoch Times on July 24, referring to the riots. “Did it deserve to have that kind of repercussions? Absolutely not.”

The point of view from federal agents, however, tells a different story. Mike Balsamo, an Associated Press reporter who was granted access inside the courthouse, said that inside, “the fear is palpable.”

Many of the Deputy U.S. Marshals he spoke with were from Portland themselves, and they have friends who peacefully protest during the day, but at night, the marshals said that “demonstrations are hijacked by agitators set on violence.”

“I can’t walk outside without being in fear for my life,” one deputy U.S. marshal, who requested anonymity, told Balsamo. “I am worried for my life every time I walk outside of the building.”

In one case, a commercial firework hit a federal officer who couldn’t respond in time. It burned through his sleeves, and the officer suffered from bloody gashes on both forearms. In another, an agent suffered a concussion after being hit in the head with a mortar firework.

Each night is a repetition of what happened the night before. Rioters escalate the situation until federal agents respond. On some nights, the federal agents leave the courthouse building entirely in order to push back and disperse the crowd.

Clashes between protesters, rioters, and federal agents often last into the morning hours, at around 3 a.m. Rioters are seen often armed with shields and hockey sticks. They also use leaf blowers that direct the tear gas back against federal agents. (Federal officers also now have their own leaf blowers.)

President Donald Trump has warned those in Portland that they could face prison if they continue to target the federal courthouse.

“Anarchists, Agitators or Protesters who vandalize or damage our Federal Courthouse in Portland, or any Federal Buildings in any of our Cities or States, will be prosecuted under our recently re-enacted Statues & Monuments Act,” he said in a July 27 Twitter post. “MINIMUM TEN YEARS IN PRISON. Don’t do it!”

A text of the order says the federal government will prosecute “to the fullest extent under the law” anyone who incites violence and illegal activity, which includes the damaging of monuments, memorials, or statues. The Veterans’ Memorial Preservation and Recognition Act of 2003 authorizes a penalty of up to 10 years imprisonment for destroying or attempting to destroy monuments commemorating those who served in the U.S. armed forces.

“This nightly violence cannot continue,” he said on July 27. “It is absolutely destroying the soul of our city.”