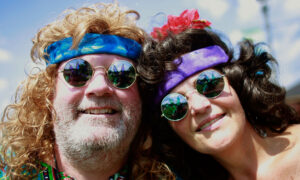 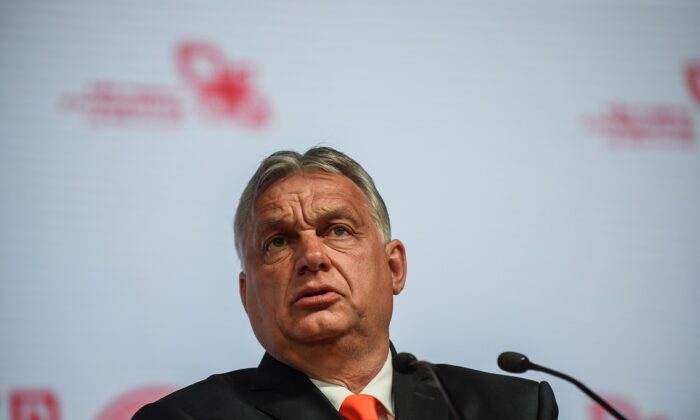 The Prime Minister of Hungary, Viktor Orbán, speaks at the press conference during a Heads of State meeting of the Visegrad group at the International Congress Center in Katowice, Poland on June 30, 2021. (Omar Marques/Getty Images)
Viewpoints

Viktor Orbán and the Defense of the Nation

What was the most clueless Tweet issued last week?

I know, I know, the judges are overwhelmed by plausible candidates.

But from my tiny corner of the Twittersphere I offer up a gem by the angry NeverTrumper Anne Applebaum.

Responding to a Tweet noting that Tucker Carlson was broadcasting from Hungary, that, in fact, he had just interviewed the Hungarian Prime Minister Viktor Orbán, Applebaum issued this day-brightener:

“In Orban’s Hungary, +90% of media is controlled by the ruling party. Businesses are physically and legally harassed if they don’t toe the party line (or if someone wants them, cheap). Elections are manipulated. Party leaders are mysteriously rich. A model for Fox?”

The inadvertent humor was not lost on her readers. Arthur Schwartz asked the critical question: “Who wants to tell her?”

Tell her, that is to say, that the media in this country, like Ivory Soap, is “99.44 %” pure, i.e., owned lock-stock-and-barrel by the regime party, consisting of the Democrats, testosterone-free Republicans, and whatever glandular configuration NeverTrump acolytes like Anne Applebaum, Max Boot, Bill Kristol, Gabriel Schoenfeld, Charles Sykes, and their brethren represent.

In a Chyron accompanying his interview with Viktor Orbán, Tucker Carlson advised his listeners “You should know what is happening here in Hungary.”

I recommend the interview.

It is a breath of fresh air, a thoughtful and intelligent alternative to the usual pabulum on offer from the public relations department of the Democratic Party, aka the mainstream media.

Orbán, like the Brazilian leader Jair Bolsonaro, and indeed like Donald Trump himself, are always being derided as “authoritarian,” “fascistic” leaders by the very people who embrace the authoritarianism of the reigning consensus.

Speaking in heavily accented but precise and eloquent English, Orbán identified exactly what it was about him that the illiberal liberals detest.

“The Western liberals,” he said, “cannot accept that inside the Western civilization, there is a conservative national alternative which is more successful at everyday life than the liberal ones.”

“America First is a very positive message here in Central Europe,” he said. “If, for Donald Trump, ‘America First,’ [then] for us, Hungary could be first as well.”

Quite right, and that is exactly what Trump said on numerous occasions.

In a long and brilliant essay in The Claremont Review of Books in 2019, Christopher Caldwell presents a picture of Orbán that is sharply at odds with the hostile portrait painted by critics like Applebaum, Boot, and Schoenfeld.

Caldwell by no means papers over Orbán’s faults—the fact, for example, that he seems to have enriched himself and his friends while in office.

It is a habit, by the way that he shares with many if not most politicians.

(Consider, Dear Reader, Barack Obama’s $11 million Martha’s Vineyard estate and the maskless birthday bash he threw there for himself this weekend for the hundreds of beautiful people who took time off from lecturing us about our “carbon footprint” in order to hop on their private jets to attend the event.)

“Orbán,” he writes, “is blessed with almost every political gift—brave, shrewd with his enemies and trustworthy with his friends, detail-oriented, hilarious.”

“In the last years of the Cold War, he stuck his neck out further than any young dissident in assailing the Soviet Union.

“That courage helped land him in the prime minister’s office for the first time in 1998, at age 35.

“He has a memory for parliamentary minutiae reminiscent of Bill Clinton.

“At a January press conference, he interrupted a speechifying reporter by saying, ‘If I’ve counted correctly, that’s six questions,’ then answered them in sequence with references to historical per capita income shifts, employment rates, demographic projections, and the like.

“His secret weapon, though, is his intellectual curiosity.

“As Irving Kristol did when he edited the Public Interest in the 1980s, Orbán urges his aides to take one day a week off to devote to their reading and writing.

“He does so himself.”

One fruit of Orbán’s curiosity is his understanding of the existential peril that Hungary faces. Dismembered in the aftermath of World War I, oppressed first by the Nazis, then the Soviets, unsettled more recently by threat of untrammeled immigration, it now faces the transnational progressive threat of an encroaching European Union for which nationalities are atavistic impediments on the road to liberal paradise (at least for the winners in Brussels and Bonn).

As Orbán noted in a speech in 2015, “Hungary must protect its ethnic and cultural composition. I am convinced that Hungary has the right—and every nation has the right—to say that it does not want its country to change.”

Caldwell describes this speech as “probably the most important by a Western statesman this century.”

Because it bluntly poses two opposing futures for Europe: Europe as a mosaic of distinct sovereign nations versus Europe as a herd of more-or-less progressive colonies defined by the spongey secular complacency of Brussels.

As Caldwell notes, Orbán has changed his mind about many things—“unregulated free markets above all.”

The vaunted “level playing field” that free markets were said to provide were not in fact level, nor were the supposedly “neutral” institutions upon which they depended.

For one thing they ignored, where they did not actively disparage, the local and particular filiations out of which real communities are wrought. (This is what Max Boot, among others, disparages as “blood and soil” rhetoric.)

Then, too, the supposed neutrality is always a sham because, Caldwell points out, “someone must administer this project, and administration, though advertised as neutral, rarely is. Some must administer over others.”

Not everyone gets to be Jean-Claude Juncker.

Allowed to proceed unchecked, the bureaucratic liberal consensus would destroy Hungary qua Hungary, just as it would eventually destroy all nations qua nations.

Viktor Orbán understands that. It’s pretty clear that Anne Applebaum does not.