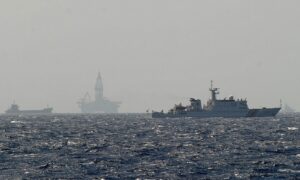 Video: Woman Throws Her 3 Children From Burning Building; Caught By US Airmen in South Korea

A fire broke out in an apartment building in Pyeongtaek, South Korea, trapping a 30-year-old mother and her children on the fourth floor—who were left with only one option: jump.

In the video, smoke can be seen billowing from a window in the apartment, clearly the site of a fire. As witnesses scream and wave their hands, the woman reluctantly dangles her children before dropping them, one by one.

After dropping her three children, ages 1, 3 and 4, she then leaps.

Below, United States Airmen, who had been stationed at the air base in Osan, heard the commotion and reacted quickly, using towels and blankets from a nearby store.

According to CNN, U.S. Air Force Master Sgt. Daniel Raymond said: “You could tell she was scared. She didn’t want to,” drop the baby down. Raymond said he begged her repeatedly to, “please just throw the baby down!”

“I remember her screaming (at) the baby, ‘I love you, I love you,” he said. “Next thing you know she dropped the baby.”

Miraculously, the mother and all three children escaped unharmed.