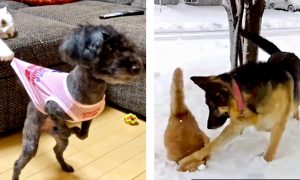 Video: These Dogs Prove They’re Simply Too Adorably Stupid for Their Own Good

A video has surfaced online showing a selection of some of the most emotional and laugh out loud funny dog videos ever committed to film.

The video includes such hilarious moments as a dog dancing in a water fountain as it tries to catch jets of liquid, another dog looking like Animal from the Muppets as it has an air fight with a hair dryer, and in the funniest moment of the entire compilation, another dog lying full length across a suitcase as it is transported across an airport.

In one of the funniest clips, we see a terrier dog standing patiently with a piece of food resting on its nose before with one swift motion it tries to flick the food into the air and grab it in its mouth for a much-deserved treat. Unfortunately for the poor pooch, he only manages to make the piece of food move from the end of his nose to the top of its head where it rests out of sight of the dog who then begins to search high and low in its surroundings, not knowing it is closer than it thinks.

Another clip shows the hilarious moment a corgi dog rushes over to its owner who waves food in a dish in its direction before turning tail and running back to its cage on the far side of the room when it realizes it is about to be chastised for the mess it has made on the floor. The really funny part of the video happens as the corgi gets back to its cage and enters it before reaching back out and pulling the door closed with its teeth, sealing itself inside to prevent further punishment.