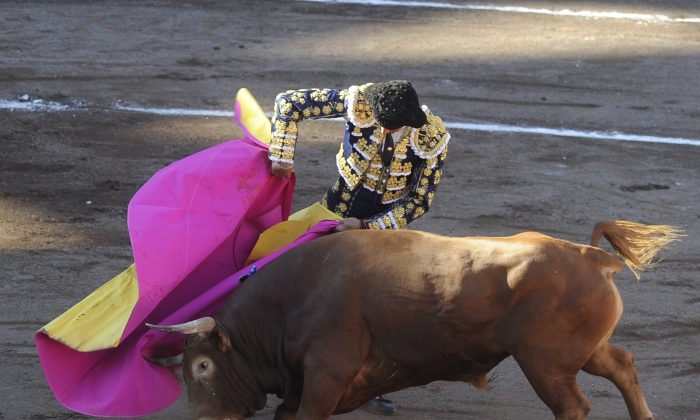 A matador sparked outrage when he wiped away “tears” from the animal’s eyes and then killed it.

The bullfight occurred during the Feria de Sevilla (Fair of Seville) in Spain on May 10, Newsweek reported, citing local media. Internet users expressed outrage over the move.

“Morante de la Puebla took a handkerchief out of his pocket to dry the tears of the bull he had been torturing for half an hour. This borders on psychopathy, it’s a sick sadism,” one person wrote of the clip.

Silvia Barquero, president of the so-called Animalist Party (PACMA) tweeted: “Only a twisted and perverse mind would be able to torture an animal until blood drips down its paws and wipe a piece of paper from its face with a handkerchief. The matador disguises his eerie lack of empathy. Abolish bullfighting NOW!”

According to the Daily Mail, the matador was identified as Morante de la Puebla. In the video, he is seen pulling out a handkerchief with his hand.

The bull is seen with four spikes sticking out of its back before Puebla kills the animal.

Fans of bullfighting said the move to clean the bull’s face was an act of respect for the animal, the Mail reported, despite the social media condemnation. Fans said that other bullfighters have done the same in the past.

Wrote user Raphael J. Cortes: “The antis distort everything. I am not going to deprive myself of sharing interesting things … This detail of Morantes caught my attention and I shared it,” Newsweek reported.

Proponents of bullfighting said it’s a cultural event that should be preserved, but some animal rights groups say that it’s cruel.

What Happens to Bulls After the Fight?

After the matador kills the bull, what happens after that?

According to Live Science, a team of horses or mules emerge and drag the dead animal out of the ring. Sometimes, the bull is pardoned after showing great skill.

“After the matador kills the bull, it is sent to a slaughterhouse. Its meat is then sold for human consumption, according to various sources, including Martin DeSuisse, founder of the nonprofit Aficionados International, which seeks to educate the English-speaking public about the Spanish bullfight,” the website says.

“The meat is being rediscovered as part of, like, the whole organic craze,” DeSuisse told the outlet. “These animals kind of grow up semi-wild almost, even though they’re still, by definition, in a way, domesticated animals,” DeSuisse noted. “They grow up with very little human intervention, in a sense, so it’s as organic, I guess, as meat can be.”

“Bull meat has a wild taste, Javier says, because the bull dies in the fever of the fight,” Thacker wrote, according to LiveScience. “In his butcher shops, [Zabalza] sells bull meat for cheaper than regular beef, because it’s too lean and is good only for stew,” Thacker added.