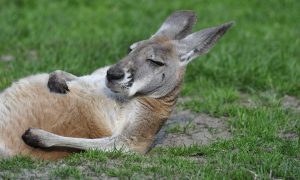 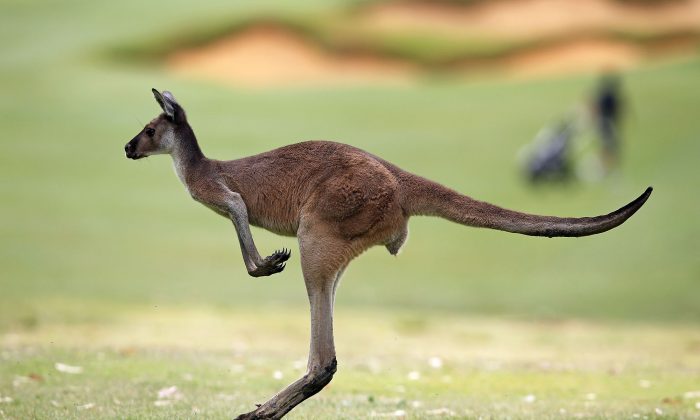 Shooting of kangaroos has sparked fears of eradication of the species. (Paul Kane/Getty Images)
Australia

A Canberra paraglider has learnt the hard way that not all kangaroos that come up close are friendly, after one attacked him on March 7, 2019.

Jonathan Bishop thought it would be a good idea to land near the old Orroral Space Tracking Station, formerly a NASA station built to support satellites in space for the agency’s Spacecraft Tracking and Data Acquisition Network.

However, moments after he landed, a grey kangaroo quickly hopped towards him and attacked him without warning.

The footage shows the kangaroo striking Bishop with its paws twice before he shouted at the wild animal and it hopped away.

“As it ran towards me I thought it was being friendly so I said ‘What’s Up, Skip?'” Bishop commented on the YouTube video. “It then attacked me twice before hopping away.”

Paragliding sounds like fun until you’re greeted by an irate roo.https://t.co/FO1YCCDhnP

‘What’s up, Skip?’ asks paraglider – before ‘roo beats the snot out of him https://t.co/CRZhVvnRUJ pic.twitter.com/Wx3sqqSKRP

Bishop had been filming his paragliding journey across the countryside for almost two hours before deciding to take a break and landing on a concrete slab near the station. His helmet camera was still recording when the attack happened.

“It is the last cleared valley where I could safely land, as over the next ridge there is only wilderness and trees,” he said. “I was concentrating on the landing and didn’t notice the kangaroo until after I landed.”

Bishop packed up his paraglider and walked several kilometers before he could find mobile phone reception and call a friend to collect him. When he returned home, he posted the video to social media where he attracted more than 1.1 million views.

Many people who watched the video online commented about the unpredictable behaviour of kangaroos when they are under stress.

Timbo Wilderbeeste recalled one time he saw a kangaroo hopping ahead of his car at night instead of allowing his car to pass.

“It suddenly turned around and came at the car, and as I slammed on the brakes I just managed to pull up before hitting it where it had suddenly frozen on the road,” Wilderbeeste said. “By the time I came to a screeching standstill its chin was resting on the hood, and it just stood there looking at me as if it was taking a well-deserved break.”

T 1000 shared an experience of walking through an open plain with more than 100 kangaroos that seemed indifferent.

“They don’t give s— until you step on a stick and then they all just run this is weird,” T 1000 said. “Maybe it thought he was a eagle trying to snatch a Joey.”

In any case Bishop could consider himself lucky he did not end up with any serious injuries after the attack. A Queensland wildlife carer suffered horrific injuries after being attacked by a kangaroo on Oct. 13, 2018.

Linda Smith, 64, had a collapsed lung, broken ribs, cuts and other injuries after a 183cm (six foot) tall kangaroo attacked her. She had tried to stop it from attacking her husband, who was feeding animals near Millmerran, 82km (51 miles) southwest of Toowoomba.

“I went outside to try and help him and took a broom and a piece of bread but he knocked the broom out of my hand then attacked me,” Smith told the Australian Associated Press on Oct. 14, 2018. “I got him off Jim and Jim got up and I managed to grab a piece of wood to defend myself with that then my son came out to try and help me and hit him over the head with a shovel.”

The woman had cared for wildlife more the past 15 years, and she pleaded with authorities not to put down the kangaroo.

“I am always careful, especially of the males. It’s breeding time so they can be more aggressive,” Smith said. “I don’t want this kangaroo to be hunted down and killed; I love animals.”