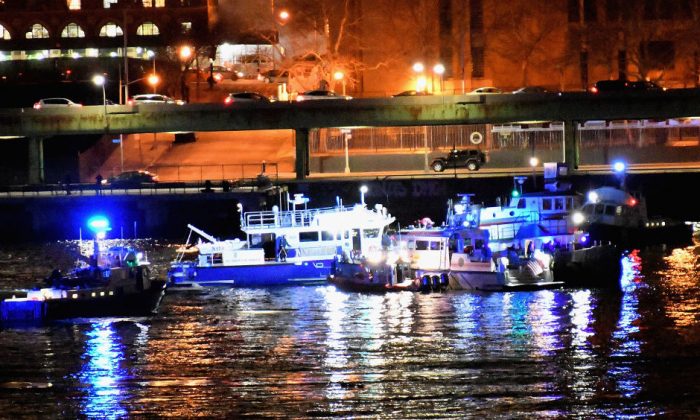 A chilling video posted on Instagram by one of the victims of the East River helicopter crash in New York City captures the final moments of the passenger’s lives.

The chopper plunged into the East River waterway killing five of the six people on board on Sunday, March 11.

The pilot was the only survivor, the Washington Post reported.

According to Fox News, the victims are identified as Trevor Cadigan, 26, of Dallas; Carla Vallejos-Blanco, a 29-year-old visiting the city from Argentina; Brian McDaniel, a 26-year-old Dallas firefighter; Daniel Thompson, a 34-year-old from New York City; and 29-year-old Tristian Hill.

The 35-second video was shot by Cadigan, a video journalist, his brother-in-law Travis Howard told The Washington Post.

Footage shows one of the men flashing a thumbs up and smiling as the helicopter took off. It appeared to be around sunset at the time of the video.

A chilling Instagram story video taken by @tncadigan, one of the victims of the East River helicopter crash captures the final moments before the chopper plunged into the New York City waterway, killing five of the six people aboard. The video was taken by Trevor Cadigan, 26, of Dallas, according to his brother-in-law Travis Howard, who spoke to the Washington Post. The New York Post, citing sources, identified some of the other victims as 26-year-old Brian McDaniel, also from Dallas, Argentinian Carla Vallejos-Blanco, 29, and a 34-year-old man from New York City.

It’s unclear exactly what caused the crash at this time. But the video surfaced as investigators were seeing if one of the passenger’s bags may have accidentally hit the fuel shutoff button, Fox News reported.

The helicopter was removed from the river on Monday afternoon.

The group of five passengers was flying on the private Eurocopter AS350 for a photo shoot before it crashed.

#happeningnow. Helicopter taken out of the East River. #helicoptercrash pic.twitter.com/QKAQ2iZkKs

Footage of the crash captured from witnesses showed the helicopter falling quickly before capsizing in the water and tilting onto its side.

During the crash, the pilot managed to free himself and call for help, witnesses told reporters at the scene. A fire boat carried the pilot to shore where an ambulance took him to the hospital, according to The Washington Post.

@cnn @FoxNews just witnessed a helicopter crash into the East River .. hope everyone’s ok. Caught it all on tape! pic.twitter.com/saHOMTLR69

Unnamed police sources told the New York Post that the helicopter pilot was Richard Vance, a native of Danbury, Connecticut.

“He’s a very good pilot,” his father, Anthony Vance, told the newspaper, adding that Richard has flown “a lot of years” with a commercial pilot’s license.