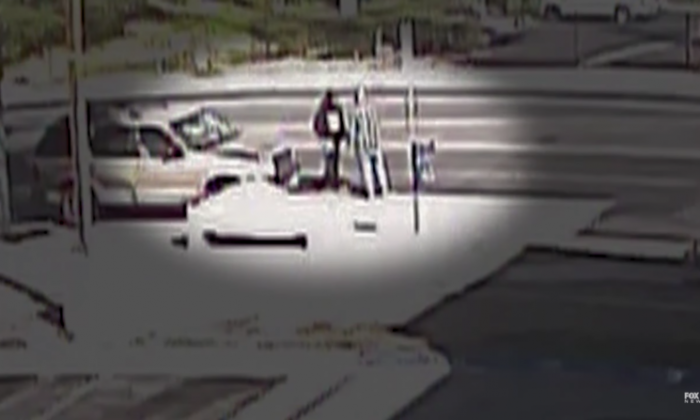 A video released by California police shows the shocking moment when a career criminal fatally punched a sheriff’s deputy after a minor fender bender on the morning of New Year’s Eve.

Smith rear-ended Falce’s car after the deputy slowed down because of two dogs on the road. Falce and Smith appear to get out of their cars and confront each other, the video shows.

Smith appears to return to his vehicle but then turns around, walks up to Falce and furiously punches him in the face, sending the elderly deputy’s unconscious body to the sidewalk.

Smith then gets into a car an begins to escape. A Good Samaritan in a pickup truck is then seen ramming Smith’s vehicle.

“I was just so, so shocked. My instincts just kind of kicked in,” the witness added.

Smith was arrested 12 hours later and charged with murder.

“We believe that he was knocked unconscious almost immediately and he never did regain consciousness,” San Bernardino Police Chief Jarrod Burguan said, according to Fox News.

Falce never regained consciousness and died of his injuries.

“This person needs to spend the rest of his life in prison,” the police chief said about the suspect.

Falce served with the San Bernardino County Sheriff’s Department for 36 years. He was the oldest member of the department with a current stuff of some 3,700 people. The department doesn’t have a mandatory retirement age and instead requires deputies to pass training exams in order to stay on the job.

“He spent all of those years basically patrolling the community he lived in,” department spokeswoman Cindy Bachman told Fox News.