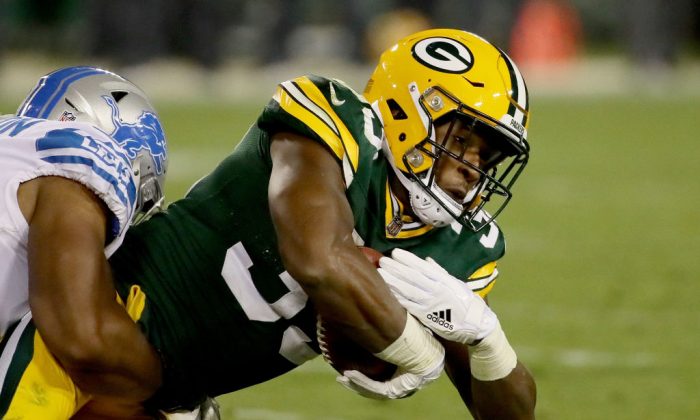 Green Bay Packers running back Aaron Jones is facing charges after he was arrested during a traffic stop.

A video of Jones’s arrest was published by TMZ. An officer smelled a strong odor coming from his vehicle after he was stopped for allegedly driving 79 mph in a 55 mph speed zone.

“I was smoking it,” Jones replied.

“Yeah, there you go. I appreciate the honesty,” the officer said.

Jones then took a field sobriety test and failed it. He was arrested and sent to a hospital to get a blood test.

According to ESPN, Jones was driving in Ashwaubenon, Wisconsin on Highway 172 on Sunday, Oct. 1, when he was arrested.

He was charged with speeding, operating with a restricted controlled substance, and operating without a valid license. He pleaded not guilty to the charges, and is due back in court in February.

“I spoke to Aaron after the incident,” Packers coach Mike McCarthy said, ESPN reported. “It’s been a while since, I don’t recall the date. He made a mistake, and I know it’s a pending legal situation. But yes, I am aware of it.”

Jones is the leading Packers rusher with 370 yards on the season. He also has three rushing touchdowns.

Jones could be suspended by the NFL, but the league has yet to issue a statement on it.

Several days ago, Jones issued an apology for the arrest.

“I owe an apology to my family, teammates, coaches, the fans and the Packers organization,” Jones said, ESPN reported. “I made a mistake, and I take full responsibility for it. And it won’t happen again. I can’t speak on it because it’s an ongoing legal matter.”

Jones said that he would “definitely” play again in 2017. He’s currently sidelined with an MCL injury, Bleacher Report said.

We have a small favor to ask of you. If you can, please share this article on Facebook so you can help NTD. It takes less than a minute. Thank you very much!