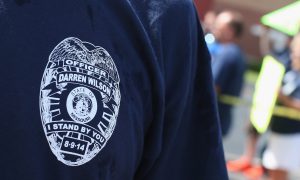 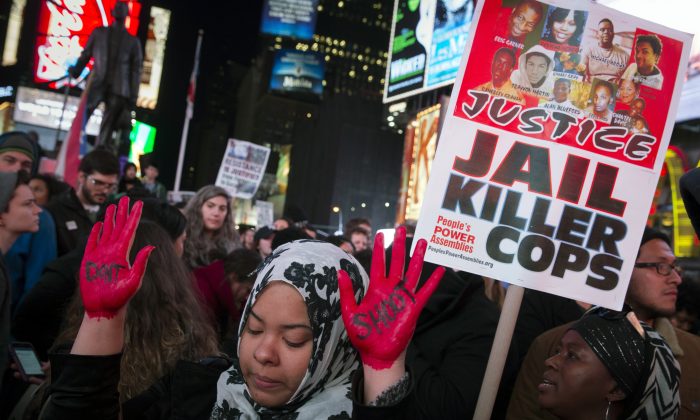 In this Nov. 25, 2014 file photo, demonstrator Maryam Said raises her painted hands during a protest against a grand jury's decision on Monday not to indict Ferguson police officer Darren Wilson in the shooting of Michael Brown in New York. (AP Photo/John Minchillo, File)
US

Nancy Grace has joined others questioning the story of Ferguson police officer Darren Wilson, who has been under close observation following the death of Michael Brown.

Wilson killed the unarmed black teenager earlier this year, leading to riots and questions of racism and other issues.

The grand jury that was convened, though, decided against indicting Wilson.

Grace went on CNN after the grand jury decision and said Wilson’s story “doesn’t add up.”

“When people say, it does not add up, I will tell you what doesn’t add up, these photos,” Grace said, holding up copies pictures of Wilson’s face after the shooting.

“I’ve looked at a them, I’ve studied them, and I was expecting to see his face mangled. He doesn’t even have a bruise. right? It’s red. He’s got a red mark!”

Grace said that he inclination was to side with Wilson but that she couldn’t ignore the evidence.

“Look, do you know how many times I have sided against a cop?” Grace asked. “Never. But to me, this is bigger than a badge. And I don’t like speaking out against a cop, but this doesn’t add up.”

Wilson said that Brown tried to physically harm him, and he was forced to shoot him to protect himself.

Grace later said that it was the prosecutor who failed in the investigation, not the jurors.

“The grand jurors are like sheep, they’re babes in the woods. The prosecutor’s duty is to seek the truth,” she said. “I am telling you that the prosecutors, if they want an indictment, they will get an indictment.”

Grace also questioned Wilson’s assertion that all he was thinking of when he shot Brown was how he wants to “live.”

“If you wanted to live, then put the pedal to the metal and drive when the guy is trying to jump in your car and grab your gun!” Grace said.

People had divided opinions over Grace’s reaction, but many sided against her.

“Nancy needs to get back in a courtroom for a while and out of the television studio, because she’s lost any fact-based analysis discipline she might have had as a prosecutor,” said one. “She complains of the severity of Wilson’s bruising, not the fact of the bruising. In other words, her complaint is that Brown didn’t hit the officer hard enough.”

“Imagine if Brown had gotten the gun from the PO, killed him, & then killed other people with the PO’s gun,” said another. “Hell, if you shoot a PO, you wont have a problem shooting the GP. That would be the PO’s fault too? Absolutely no responsibility assigned to the criminal, correct?”