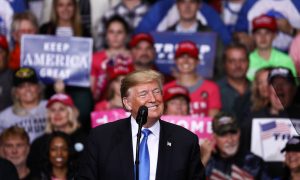 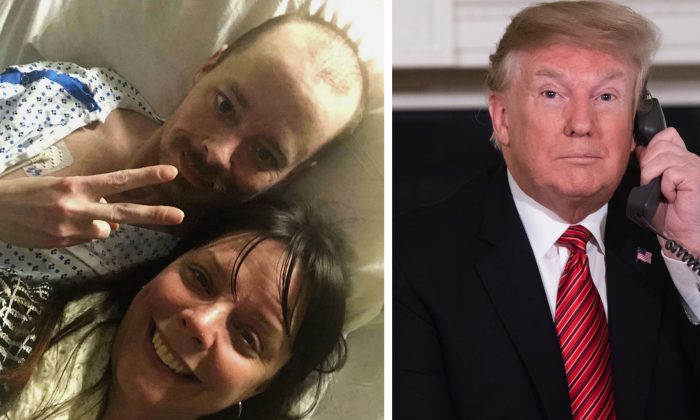 Selfie provided by Bridgette Hoskie, her brother Jay Barrett and herself pose for the photo inside an ICU at Yale New Haven Hospital in New Haven, Conn., on Feb. 26, 2019. Barrett, a terminally ill Connecticut man who's a big supporter of President Donald Trump, is getting a bucket list wish fulfilled, with help from his Democratic sister. (Bridgette Hoskie via AP—Saul Loeb/AFP/Getty Images)
US News

Jay Barrett, of West Haven, who has cystic fibrosis, left the hospital to begin palliative care at his sister’s home last weekend and asked for some sort of contact with the president before he dies.

#WestHaven man, who is dying, and had meeting @realDonaldTrump on his “bucket list,” received a call from @POTUS this afternoon. The President has also arranged for some special surprises to be delivered to Jay Barrett on Saturday. @FOX61News pic.twitter.com/mxUgIuFFEy

His sister, West Haven City Councilwoman Bridgette Hoskie, who describes herself as “100 percent Democrat,” went on social media to help make it happen. Friends and other supporters sent emails to the White House.

The efforts paid off Tuesday night, March 5, when Barrett, 44, received a call from Trump.

Trump told Barrett he’s a “champ,” and that a personal letter is coming his way.

Eric Trump “told me they’re pulling for me and praying,” Barrett said.

Patton, who is from New Haven, said she’s coming to Connecticut on Saturday to give Barrett a signed gift from the president. She also reached out to the Trump family after a New Haven Register story about Barrett’s wish was posted online.

Barrett, who for most of his life considered himself an independent, voted for President Barack Obama in 2008, but didn’t like many of his policies, including the Affordable Care Act.

Barrett said he came to realize he was a Republican and loved Trump’s style and his policies.

His original goal was to get to Washington to meet the president in person and shake his hand, but he said he’s grateful for anything.

Even though he’s supposed to have only six months to live, Barrett said he intends to be around to vote in 2020.

The Epoch Times asked supporters from across the country, “What words of wisdom do you have for President Trump?”

Answers may have been edited for brevity and clarity.

“If President Trump were to read this, I would tell him that I am so proud of him and all he has done for the country, and for his stance on things, and his backbone, and not [being] willing to be a pushover just to make others happy. The American people are behind you, and praying for you and your family. I can honestly say that I am proud to be an American with President Trump as my president! God bless the USA.”

“Keep appointing the justices and use the Senate to promote your agenda. There are a lot of Americans that don’t pay attention to Twitter because they are working or have some type of responsibility to account for. Sure, it is a source for the mainstream media as they have to live on it, but it stopped being a bright shiny object when all of the nastiness and shaming [started appearing]. And quite frankly, when everybody is an expert, nobody is an expert. I think the president is winning with China and should stay the course, but do a better job of explaining how we are winning. Our European friends are paying the consequences of globalism because they forgot to fix their own countries first. Why the left loves ‘The European Model’ is beyond logic. Keep the economic pressure on Iran and Korea.”

“My biggest thing I would tell Trump is to keep taking a stand for Americans. Don’t back down. I truly believe because he pushes for things that he sees will help us, he won’t give up on them. That’s what makes him a great president and America—he is fighting for us!! If people would quit wishing for him to fail and see the stuff he is helping [with] and wanting to do, then they might come to realize that President Trump is one of the greatest presidents we have had. He is not a politician, he’s not there for the money, hence, he isn’t even getting paid for putting up with all the crybabies and bullies that he and his family have endured. People should want our president to succeed because if he does, we as Americans do.

“I have never seen such awful, disgusting things be said about a president. People used to respect whoever was in the White House, even if they didn’t agree with them. This is a time when actors and actresses can say they wish the president dead and no one bats an eyelash. Society has truly lost its morals.”

“If I were addressing President Trump directly, I’d tell him he’s doing a fine job. Out here in Lee County, Virginia, we appreciate his efforts and support his refreshingly open way of speaking to the American people. We are seeing higher wages and lower prices at the gas pumps, and let me say, that’s a big deal around here! Keep pushing forward!  Keep bringing jobs back to American soil. Continue thinking of Americans and putting our needs first, above other countries. Keep making America great again, it’s working!”

“Follow through on your campaign promises. Build the barrier (wall/fence). Don’t take any further action against the 2nd Amendment, your action against bump fire stocks angered a large portion of your base who elected you. Your base will abandon you if you take any more jabs at the 2nd Amendment. Pass pro-gun legislation, such as the ‘Hearing Protection Act.’  Do not pass any ‘red flag’ gun-control legislation. Abolish the federal Department of Education. Abolish the federal EPA. Organizations such as the DOE and EPA should exist at the state level only, not the federal level. This will allow states to compete against each other, while reducing burdensome and wasteful federal regulations. Abolishing such organizations would also bring the federal government closer to compliance with the 10th Amendment.”

“President Trump, do not lose heart. Your people love you and your family. We lift you up in prayer every day. These wanton fools who now control the House of Representatives are far from the hearts of ‘We the People.’ They are clowns and buffoons and they shame the hallowed halls through which they walk. Not a one of them works for us! They should have to wear jackets like Nascar drivers so we would all see clearly who has bought and paid for them. Stay strong, dear man, and know that there are many whose confidence in you has never wavered.”

“Mr. President, thank you for all your hard work and effort. Please continue to Make America Great Again. You have accomplished so much with no help at all from the Democrats and little help from the Republicans. We The People that elected you as our president appreciate all you have done and are doing. Build the wall. Do not be swayed or discouraged by what you see on the fake news. They show the mobs of fools that proclaim to hate you, but allow those that gather to support you to go unnoticed and unseen. We love you and pray for you.”

“Keep doing what you’re doing, Mr. President. Please don’t back down, and stand your ground against the new House, now and for the next six years. Let your resolve get stronger, your spine get longer, and your faith in your supporters, your family and, most importantly, in God grow, to the point where you, your presidency, and your faith in God and country become an indestructible, impenetrable force that we will love more, and the leftists will loathe … to eternity!”

“My advice to Trump is to stand firm and continue on. He’s doing a great job for our nation and has proven that he meant the things he said when he was running for office. I will proudly vote for him again in 2020.”

“Hold the line and don’t give in to Democrats. They do not have our interest and concerns at heart. More judges, more tax cuts, less illegal entry to America.”

“Stay firm and keep up the good work. It could get rough.”

“I would tell President Trump to hold firm and not compromise. He has my support. He was my last choice in the primaries because, with a colored past, I didn’t believe he would deliver on what he promised. He has delivered on what he promised and he promised my values. I also encourage him to keep tweeting and don’t allow the mainstream press to define the issues. Fake news is real. Keep fighting fire with fire, and we’ll do what we can on our end.”

“Stand your ground regarding the money for the wall. Be prepared to make a deal in which the Democrats get something they want as well. The wall is non-negotiable. If they won’t participate, then use your border security funds to ramp up security along our border.”

“Keep up the good work! Keep fighting for the American people. Don’t give into the ‘establishment way.’ Follow the truth. Keep focused on making and keeping America great!”

“Mr. President, continue to remember all the rallies and how we all supported your ideas and sentiments. We support you 100 percent!”

The Epoch Times reporter Charlotte Cuthbertson contributed to this report.