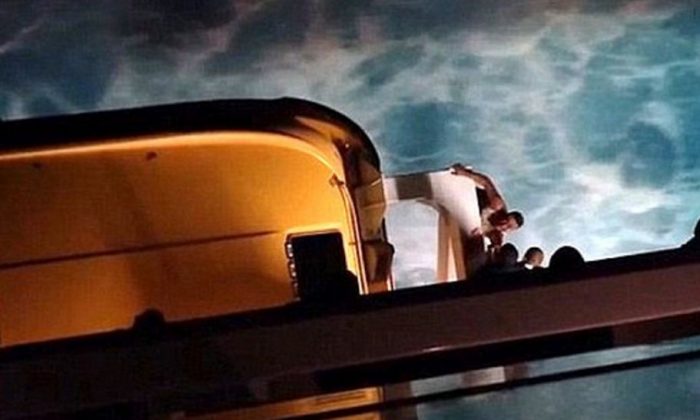 A man allegedly jumped off a Royal Caribbean cruise ship last week, and it was captured on video. (Screenshot taken from YouTube video. )
Americas

The lawyer for a man who allegedly jumped off a Royal Caribbean cruise ship around 20 miles off the Turks and Caicos Islands said he fell off the vessel. The incident was captured on video (WARNING: potentially disturbing content):

Bernardo Albaz, 35, was filmed by fellow passengers clinging to a life boat. He shouts: “Because of you, this happened. Let go of me. Get off of me.” After that, he disappeared into the dark water below.

Albaz, of Brazil, is missing and presumed dead.

“Our on-board security team responded to the guest’s stateroom after a neighbouring guest complained about a domestic dispute on the guest’s balcony,” Royal Caribbean said in a statement.

“Our staff did not have a physical altercation with the guest and were unable to prevent his jumping from the stateroom balcony. Royal Caribbean is deeply saddened by this event. We will continue to provide assistance to the family as well as law enforcement.”

Three days after Albaz fell, his family lawyer, Mike Winkleman, is telling a different story. He said Albaz didn’t jump and ruled out suicide in the incident. He said Albaz was dangling out on a life boat after an incident at a ship bar involving a crew member. Albaz, according to the lawyer, was insulted by a staff member and led to a “huge altercation,” reported News.com.au.

Winkleman said, “Royal Caribbean says this was a domestic dispute and a suicide. It was anything but that.

“Bernardo ended up getting in a huge altercation and ended up in his cabin where he was furious and ultimately Royal Caribbean security came to the scene.

“As a result of the altercation in his cabin Bernardo falls off his balcony onto the life boat area.”

The incident took place on Friday about 75 miles off the coast of the Bahamas.

A Reddit user who said his parents were on the cruise ship said it was halted pending the investigation. The ship then was sent back to Florida. According to rumors, the user said that “family fighting and alcohol were involved.”