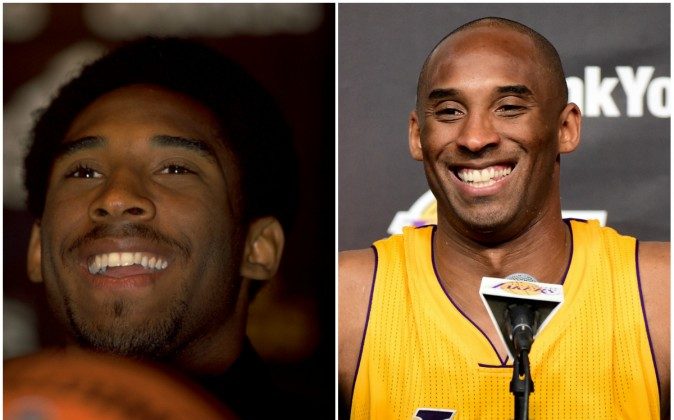 Kobe Bryant, on the left, in August 1998 during a promotional tour of Australia and, on the right, on April 13, 2016, after his final game for the Lakers. (Allsport UK /Allsport and Harry How/Getty Images)
NBA

In storybook fashion, 37-year-old Kobe Bryant closed out the final game of his 20-year career with a whopping 60 points on April 13—setting a record for the most points scored in a player’s final game.

But Kobe “Black Mamba” Bryant is no stranger to records.

Along with his high-point finish, the Mamba also set a record for taking the most shots in the final 30 seconds in a game—and retires third on the NBA’s all-time scoring list, winning five championships.

His final four-quarters were at the Los Angeles Lakers’ home court, the Staples Center, against the Utah Jazz.

The Lakers defeated the Jazz, 101-96, marking the sixth 60-point game of Bryant’s career; his first game scoring over 50 points since February 2009. Bryant himself outscored the Jazz in the fourth quarter; dropping 23 over the Utah team’s 21.

He was heavily honored by the Lakers; from the administration, to former players, current players, and coaches. The Mamba has had 18 All-Star selections with the Lakers, setting a record for playing 20 seasons with just one team.

After the win, Bryant became the oldest player to score 50 points in an NBA game, taking a career high 50 shots, shooting his 10,000th free-throw and was on the hardwood for 42 minutes.

“The thing that had me cracking up all night long is, I go through 20 years of everybody screaming to pass the ball,” Bryant said after the game. “And then the last night, they’re like, ‘Don’t pass it!'”

Magic Johnson, a historic Laker player himself, payed tribute prior to the game by calling Bryant “the biggest and greatest celebrity we’ve had in this town for 20 years,” referring to him as “the greatest to wear the purple and gold.”

With Bryant’s final win, the Lakers snapped a six game losing streak, capping off a miserable 17–65 record and missing the playoffs for the third straight season—but fans were able to put that to the side to watch Bryant for one last time.

“We weren’t trying to let him go off on a win,” said Joe Ingles, a Jazz player who guarded the Mamba closely all game. “What he did was pretty impressive. He made some tough shots, too. I don’t think we gave him any open looks. He was obviously pretty hyped up for the game, forty-two minutes and 50 attempts will get you 60.”

Covered in sweat and confetti, in a uniform he has worn for the past 20 years but will never wear for the NBA again, Bryant expressed thanks to his family, friends, and fans for their support throughout two decades.

Prior to tip-off on Wednesday night, a montage was played throughout the arena featuring actor Jack Nicholson, ex-Lakers Shaquille O’Neal and Derek Fisher, Dwyane Wade of the Heat, Kevin Garrett of the Timberwolves, Carmelo Anthony of the Knicks, Stephen Curry of the Warriors, LeBron James of the Cavaliers, Pau Gasol of the Bulls, Gregg Popovich, head coach of the Spurs, and Phil Jackson, former Lakers head coach.

Nicholson, who was court-side for the final game, said, “You’ve been an inspiration to us all. L.A. loves you.” Other celebrities present included Paula Abdul, Jay Z, Snoop Dogg, David Beckham, Kanye West, Lamar Odom, and Adam Levine.

At the God’s last game pic.twitter.com/eucluEFOFX

After the video, spectators started a “Kobe!” chant, followed by a national anthem rendition by the Red Hot Chili Pepper’s bassist, Flea.

“Los Angeles is full of movie and TV stars, but they are not local heroes. They belong to the world,” The Associated Press said of Bryant. “Kobe belonged to L.A.”