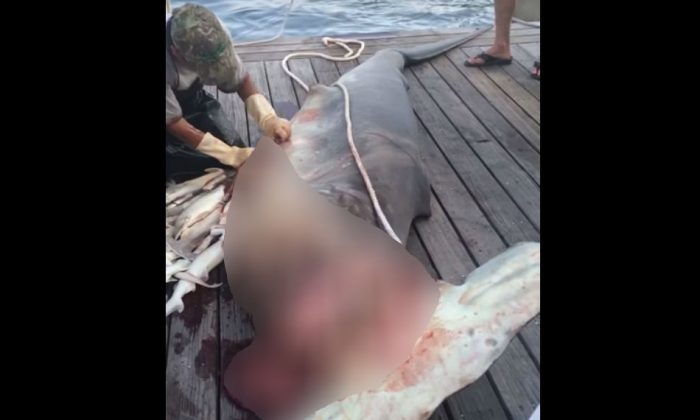 Video: Hammerhead Shark Has 34 Babies Inside

Something insane was captured off the coast of Destin, Fla.

A YouTube user, Jeff Bratcher, took a video of a fisherman gutting a hammerhead shark with 34 babies inside.

Here’s the video footage of the incident (warning– it’s graphic):

“For the record I did not participate in this atrocity. We were on a vacation and we walked upon this in Destin,” he wrote.

He added: “Yes I was [filming] this, we were here on vacation from Oklahoma… The lady in the background is someone I’m not affiliated with. The reason I don’t sound upset or worried I had my kids with me and were already in shock from this. I did not know the laws of the different species of fish. I knew it was wrong that’s why you hear me ask the man what are you going to do with this, he just looked at me!”

According to news reports, the pregnant hammerhead was likely shot and speared.

The shark was apparently caught in international waters. Great hammerhead sharks are listed as endangered by the International Union for Conservation of Nature, but they’re not protected by the U.S. government. They are, however, protected under Florida state law.