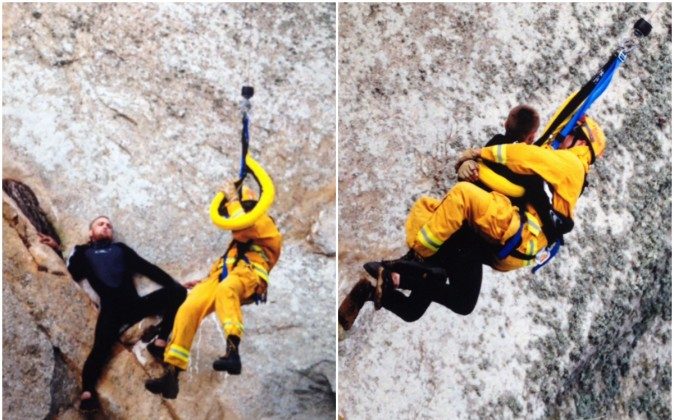 (Via Morro Bay Fire Department)
US

Video: Fire Department Rescues Man Who Gets Stuck After Climbing 600-Foot Rock to Propose to Girlfriend

As Oscar Wilde once said, “Marriage is the triumph of imagination over intelligence.”

Twenty-seven-year-old Michael John Paul Banks of Fresno, California, stretched his imagination past his intelligence on April 7 when he climbed up the 576-foot-tall Morro Rock to propose to his girlfriend.

Kinney … was safely returned to land with just a few scratches and a misdemeanor for trespassing at around 9:30 a.m.

The climb itself went smoothly (as did the proposal because she said “yes”), but on the way back down, he became stuck and required a rescue from the local fire department.

“It was a pretty amazing rescue on the part of the Fire Department,” said Morro Bay State Park Ranger Dale Kinney, who noted Banks climbed down the steeper, eastern mountainside after the sunrise proposal via FaceTime.

Shortly after 8:30 a.m., the Morro Bay Fire Department, as well as police, State Parks, and Harbor Patrol responded to the scene.

Kinney reported a helicopter had to fly close enough to Banks to get a harness on him—who was safely returned to land with just a few scratches and a misdemeanor for trespassing at around 9:30 a.m.

According to the Morro Bay City website, Morro Rock is a State Historic Landmark that was formed about 23 million years ago from the plugs of long-extinct volcanoes.

It served as an important navigational aid for mariners because the rock is approximately 600 feet tall, making it the most visible in a chain of nine Californian peaks.