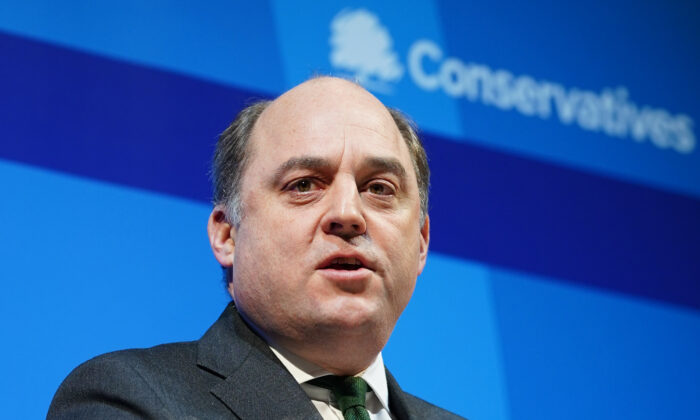 Two notorious Russian pranksters have published footage from a hoax video call made to British Defence Secretary Ben Wallace last week, which the UK government blamed on the Kremlin.

Defence Secretary Ben Wallace and Home Secretary Priti Patel said they had been targeted by calls from imposters last week, and Downing Street revealed an unsuccessful attempt was also made to contact Culture Secretary Nadine Dorries.

Wallace is shown speaking from Poland as the caller says Ukraine wants to progress a “nuclear programme” to protect itself from Moscow, a claim Russian state media has made in the past.

After the footage was published, Wallace said, “Things must be going so badly for the Kremlin that they are now resorting to pranks and video fakes.”

Critics have accused the Russian hoaxers of having links to Russian security services, something they deny.

They have targeted high-profile politicians and public figures in the past. They were allegedly behind a hoax call to Boris Johnson in 2018, when he was foreign secretary, in which he was targeted by a caller pretending to be the prime minister of Armenia.

The prime minister’s official spokesman said: “The Russian state was responsible for the hoax telephone calls made to UK ministers last week.

“This is standard practice for Russian information operations and disinformation is a tactic straight from the Kremlin playbook to try to distract from their illegal activities in Ukraine and the human rights abuses being committed there.

“We are seeing a string of distraction stories and outright lies from the Kremlin, reflecting Putin’s desperation as he seeks to hide the scale of the conflict and Russia’s failings on the battlefield.”

Wallace became suspicious during the 10-minute video call on Microsoft Teams on March 17, supposedly with the Ukrainian prime minister.

He ordered an investigation into the security breach, and Armed Forces minister James Heappey said that the defence secretary was “very cross” as it should not have been allowed to happen.

But Heappey expressed confidence that Britain’s national security was not compromised by the hoax calls because the targeted ministers would have known not to discuss sensitive security matters on a system such as Teams, which the Russians could easily listen into.