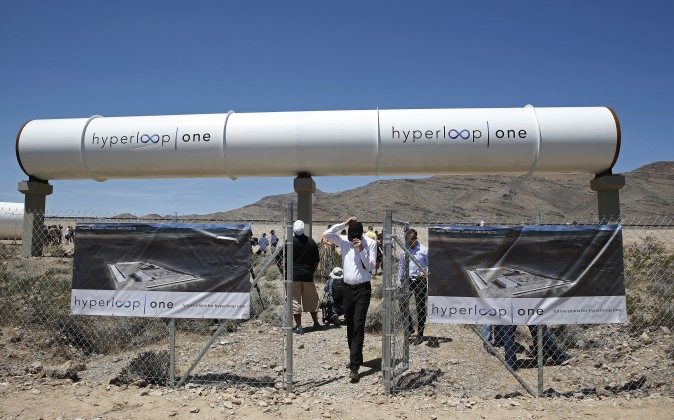 People tour the site after a test of a Hyperloop One propulsion system, Wednesday, May 11, 2016, in North Las Vegas, Nev. The startup company opened its test site outside of Las Vegas for the first public demonstration of technology for a super-speed, tube based transportation system. (AP Photo/John Locher)
US

Potentially the world’s next major mode of transportation, the Hyperloop, saw its first test run on May 11.

The concept, originally drawn up by Tesla and SpaceX founder Elon Musk, is designed to move “pods” filled with passengers through tubes, which move at ridiculously high speeds—700 miles per hour.

Although today was just a startup company’s attempt at the Hyperloop’s supposed track mechanism, the Las Vegas, Nev., first trial run was successful, and even picked up new investors and parters to aid in production.

The 700 mph #Hyperloop just got one step closer to reality. @HyperloopOne held its first test run.https://t.co/7o3JcaL7f3

Hyperloop One, the startup company that conducted today’s test, announced that it will be partnering up with Danish architect Bjarke Ingels, who plans to give “some much-needed design direction for how Hyperloop One’s projects might start to integrate with the cities they’re meant to serve,” according to Gizmodo.

In his statement to Gizmodo, Ingels said: “With hyperloop we are not only designing a futuristic station or a very fast train, we are dealing with an entirely novel technology with the potential to completely transform how our existing cities will grow and evolve, and how new cities will be conceived and constructed.”

Hyperloop’s CEO Rob Lloyd said in a written statement that the new partners will aid the company in “redefining the future of transportation, providing a more immediate, safe, efficient, and sustainable high-speed backbone for the movement of people and things.”

Musk hasn’t tweeted about the Hyperloop test and it’s not clear whether he was present.