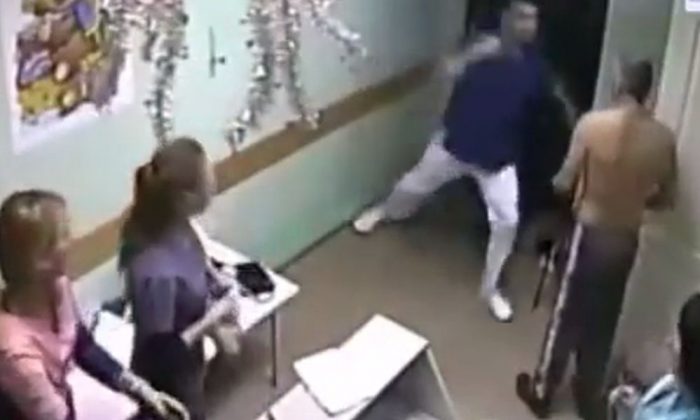 A video showing a Russian doctor brutally beating a patient to death has surfaced online, going viral on Facebook, while Russian media outlets have called the assailant “the boxer doctor.” Before he attacked the patient, he yelled, “Why did you touch my nurse?”


The incident was captured on camera in the Russian city of Belgorod.

The victim’s companion was also brutally beaten by the doctor. The doctor only lands one punch on the victim, who was not wearing a shirt. He falls to the ground and doesn’t move for the remainder of the video.

The doctor was fired and his actions were described as negligence, since officials said there was no evidence that he intended to kill the patient, CNN reported.

The doctor punched the shirtless patient in the face after the patient “kicked a nurse during a procedure,” the investigators told the Telegraph.

“The cause of death of the victim was trauma to the skull and brain from hitting the back of the head on the hard surface of the floor.”

The patient apparently went into the hospital and kicked a nurse during a procedure, CNN quoted a Russian news agency as saying.

The doctor then found out and came in to punch the man.

After that, he went after his companion, hitting him more than a dozen times, according to the footage. The man, wearing a hat, then falls to the ground, and the doctor punches him several times before kneeing him in the head.

Nurses then try to attend the shirtless man, who has laid motionless on the ground as the melee goes on around him. Later, the doctor is seen trying to revive him.

The video footage in its entirety can be seen here (WARNING: This video might be disturbing for some viewers).

The shorter version of the clip can be seen here (WARNING: This video might be disturbing for some viewers).