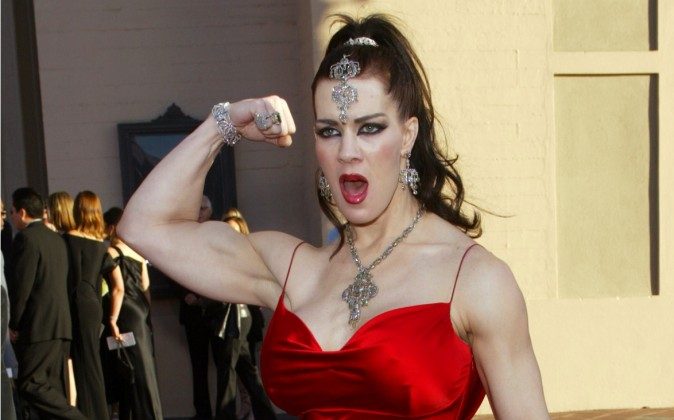 In this Nov. 16, 2003 file photo, Joanie Laurer, former pro wrestler known as Chyna, flexes her bicep as she arrives at the 31st annual American Music Awards, in Los Angeles. Chyna, the WWE star who became one of the best known and most popular female professional wrestlers in history in the late 1990s, has died at age 45. Los Angeles County coroners Lt. Larry Dietz says Chyna, whose real name is Joan Marie Laurer, was found dead in Redondo Beach on Wednesday, April 20, 2016. (AP Photo/Kevork Djansezian)
Entertainment

On April 20, famed professional wrestler Joan “Chyna” Laurer passed away at the age of 45.

She was found in her home in Redondo Beach, according to Los Angeles County coroner’s Lieutenant Larry Dietz.

#RipChyna all of us on team Chyna love you and will love you forever babe.

Shortly after, a blurb appeared on the homepage of her website saying:

“It is with deep sadness to inform you today that we lost a true icon, a real life superhero. Joanie Laurer aka Chyna, the 9th wonder of the world has passed away. She will live forever in the memories of her millions of fans and all of us that loved her.”

Here are some highlight moments from her extensive wrestling career: