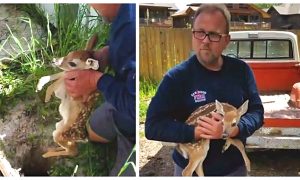 Video: Baby Deer Falls Deep Into Underground Cave, but Watch How Rescuers Go Down After Him

A dramatic video has surfaced online of the incredibly intense moment a poor, terrified female deer is rescued from the bottom of a cave by two intrepid spelunkers out on a pre-arranged trip.

In the video we watch as the two men find the poor animal at the bottom of a cave structure, shivering and terrified as it cowers in the corner clearly afraid of not only the men but the ordeal it has been through.

Undeterred by the animal’s reluctance to accept their help, the men restrain the poor skittish beast and wrap a blanket around its head in an attempt to soothe it and keep it calm.

They then attach the rope they had lowered themselves into the cave with around the animal’s legs and fasten it tightly so they can begin the rescue attempt in earnest.

Slowly they heave the hefty animal through crevices and tight tunnels toward the freedom of the surface.

One heart stopping moment seemingly shows the poor animal getting stuck and we watch as the men fight to free it and move it through the cramped space which are barely big enough for the men or the deer to fit through.

The last part of the incredible rescue shows the two men and fellow helpers on the surface lifting the heavy creature vertically upwards towards the surface and salvation.
Once out of the cave and on solid ground they carefully remove the rope wrapped around the animal’s ankles, followed by the towel around its head and the grateful animal jumps to its feet and runs full pelt towards the safety of the forest.

If you want to see the intense rescue efforts of these intrepid men then watch the video for yourself.