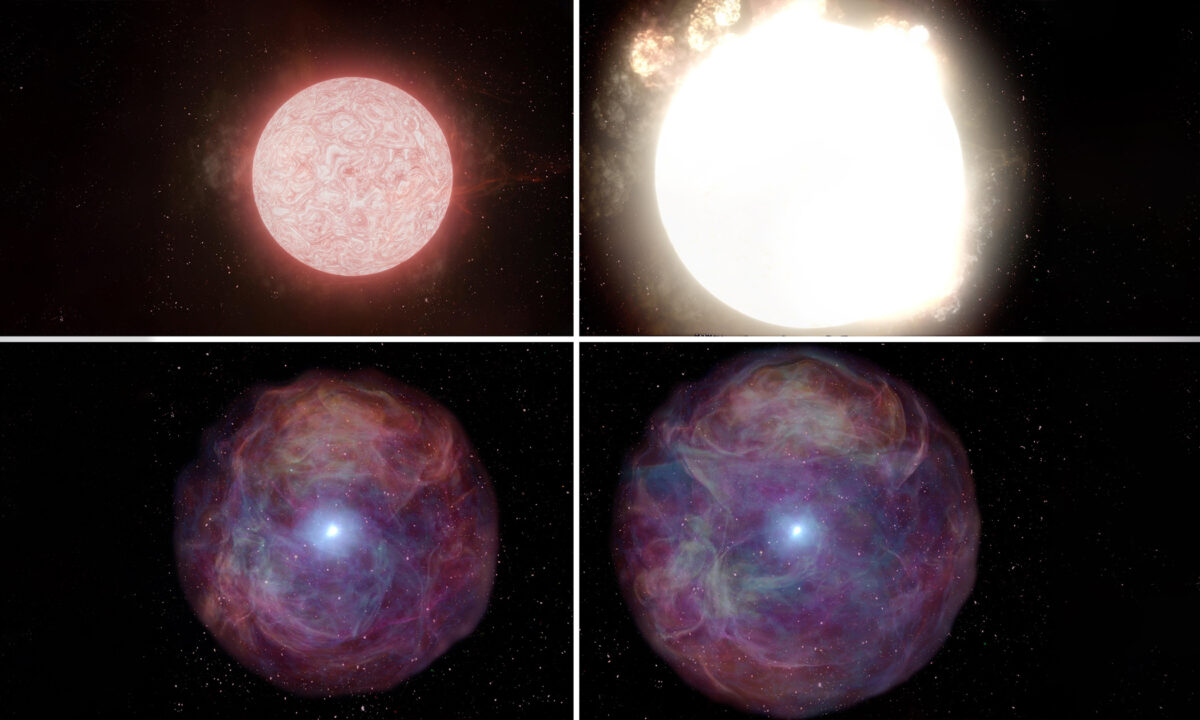 A dying red supergiant star, 10 times more massive than our sun, has collapsed—and for the first time ever, Earth observatories have imaged a Type II supernova explosion in real time.

Astronomers at Hawaii’s Keck Observatory in the summer of 2020 were conducting the Young Supernova Experiment (YSE) transient survey when a bright light emanating from a red supergiant caught their attention. Closer inspection yielded the final 130-day chapter of a star’s cataclysmic demise.

Consisting of two enormous 10-meter telescopes, Keck Observatory with its Pan-STARRS telescope on Haleakalā, Maui, (the other platform being W. M. Keck Observatory on Maunakea, Hawaii Island,) caught sight of a “huge amount of light radiating from the red supergiant,” the observatory stated. Just months later, in the fall of 2020, a supernova would unfold right before their very lenses.

Based on this real time celestial spectacle, Keck Observatory enlisted a digital artist to render the star’s destruction:

After the explosion, the team continued to monitor the supernova, which was dubbed SN 2020tlf. From data obtained by Keck Observatory’s DEep Imaging and Multi-Object Spectrograph (DEIMOS) and Near Infrared Echellette Spectrograph (NIRES), they located the once red supergiant in the galaxy NGC 5731, some 120 million light-years from Earth.

“This is a breakthrough in our understanding of what massive stars do moments before they die,” said Wynn Jacobson-Galán, an NSF Graduate Research Fellow at UC Berkeley who led the study, published on Jan. 6, 2022. “Direct detection of pre-supernova activity in a red supergiant star has never been observed before in an ordinary Type II supernova. For the first time, we watched a red supergiant star explode!”

What are Type II supernovas?

Type II supernovas occur in dying supermassive stars—at least 8, and no more that 40 to 50, times more massive than our sun. The dense iron or nickel inner core of the star cools, contracts, and ultimately collapses under its own weight, and that of overlying layers, leading to the outer core’s toppling inward as well, resulting in an implosion that can reach stunning velocities up to 23 percent of the speed of light with temperatures as high as 100 billion degrees Kelvin. This implosive energy then “bounces back” outward in a shockwave, accelerating the star’s overlying stellar material to escape velocity—causing the big boom we know as “supernovas.”

What’s left of the smashed-to-smithereens core might now take the form of either a super-dense neutron star or even a black hole; the overlying gasses, meanwhile, were violently ejected into the periphery—creating the “dense circumstellar material surrounding the the star” Keck Observatory’s Low Resolution Imaging Spectrometer (LRIS) found shortly after Pan-STARRS first spotted the doomed star.

This first-ever imaging offers novel insight into how red supergiants evolve right before they blow up, breaking from previous understandings that they remained relatively inert prior to exploding. “We’ve never confirmed such violent activity in a dying red supergiant star where we see it produce such a luminous emission, then collapse and combust, until now,” said senior author Raffaella Margutti, an associate professor of astronomy at UC Berkeley.

Going forward, this “powerful flash” before the blast could pave the way for future transient surveys, such as YSE, to search for luminous radiation emanating from other red supergiants. “I am most excited by all of the new ‘unknowns’ that have been unlocked by this discovery,” said Jacobson-Galán. “Detecting more events like SN 2020tlf will dramatically impact how we define the final months of stellar evolution, uniting observers and theorists in the quest to solve the mystery on how massive stars spend the final moments of their lives.”