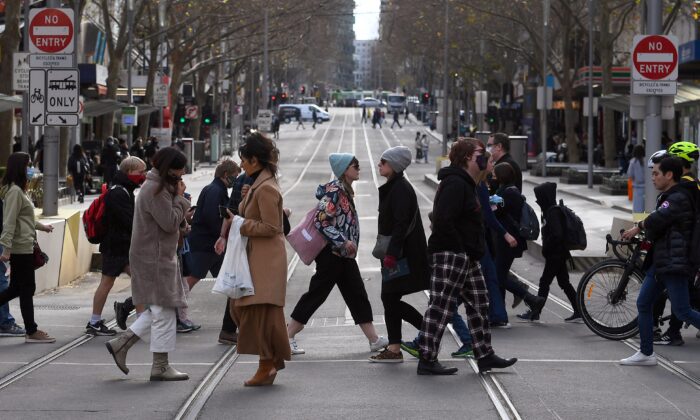 Victoria has run up a $10 billion (US$7.2 billion) deficit in the first six months of the 2021/22 financial year, although the Australian state witnessed a rise in economic activities after it relaxed COVID-19 restrictions.

According to the mid-year financial report (pdf) released by the Department of Treasury and Finance of Victoria on March 11, the deficit mainly resulted from the impacts of the COVID-19 Delta variant and the lockdown of Melbourne lasting for 77 days in 2021.

There was almost no difference between Victoria’s latest mid-year financial result and the $10.1 billion deficit the state reported in the first six months of 2020/21.

However, the economic consequence suffered by the state in late 2021 was not as severe as when it shut down Melbourne for 112 days in 2020.

Compared to September 2020, the number of employed Victorians recorded in October 2021 was higher by approximately 100,000, and the state’s final demand or total demand for final goods and services in late 2021 exceeded pre-pandemic levels due to rising household consumption.

At the same time, Victoria’s net debt rose by $16.8 billion to $89.6 billion from June 30 to December 31, 2021, as a result of government spending on pandemic measures and main infrastructure projects.

The state predicted that it would post a deficit of $19.5 billion for the entire 2021/2022 financial year, which amounted to 4.1 percent of the Gross State Product.

The news of the deficit comes after business and financial information company S&P Global forecasted that Victoria’s debt would increase by four times to over $200 billion between 2019 and 2025, causing the state and its residents to become the most indebted in Australia.

Meanwhile, the mid-year report did not fully include the adverse effects of the COVID-19 Omicron wave, which peaked in January and early February 2022, because it only covered the six months to December 31, 2021.

Nevertheless, data from the Australian Bureau of Statistics revealed that Victoria’s jobless rate stood at a record low of 4.1 percent in January 2022. Additionally, the state’s final demand increased by 1.6 percent to 3.7 percent between September and December 2021.

“Victoria’s choices through the pandemic have placed us in a frontline position for a sustained statewide recovery,” Victorian Treasurer Tim Pallas said in a statement.

Regarding the state’s revenue, Victoria collected $38.8 billion during the six months to December 2021, a growth of $7.8 billion compared to the previous year.

Taxation also went up by $13 billion from the same period last year due to increases in land transfer duty, payroll tax and in-person gambling.

“This is about the future of the state.”