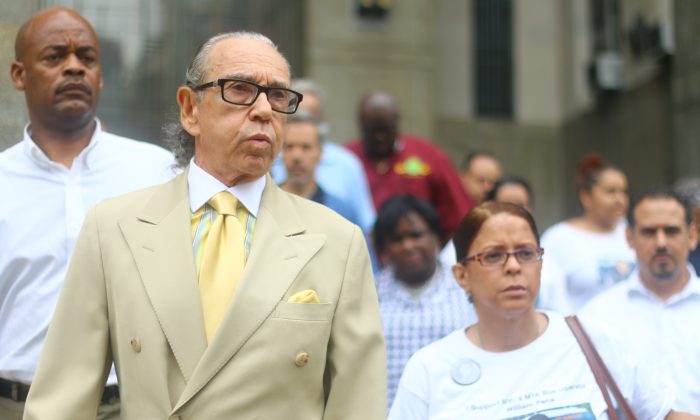 NEW YORK—At the Supreme Court on Monday, July 14, the long-term partner of MTA bus driver William Pena, who was killed in February by a man driving a stolen truck, strongly supported the Court’s decision to uphold a felony-murder indictment.

Nancy Rodriguez and lawyer Sanford Rubenstein made their statements of support following disapproving remarks by the defendant’s attorney.

“There has to be fairness,” Slovis said. He countered that the Court would be unable to prove that Whilby acted with intent—in other words, that he appreciated his actions could lead to someone’s death. “They’ll prove it when pigs fly,” Slovis said.

Pena died on Wednesday morning, February 12, after the stolen truck, allegedly driven by Whilby, struck the bus that he was driving. The crash occurred at the intersection of 14th Street and 7th Avenue. Two pedestrians and one bus passenger were also injured.

Rodriguez bore the strain of complicated legal proceedings as she descended the steps of the Supreme Court, accompanied by Rubenstein and Pena’s daughter, Gabrielle. She spoke with disdain about the “horrible” experience of having to see again and again the man allegedly responsible for her partner’s death.

“The first day he had a huge smile” she said, “as if he has no remorse for what he did.”

Rodriguez and Rubenstein both lauded the Court’s decision to uphold indictments of murder in the second degree, grand larceny, and burglary against Whilby. The family has suffered the “most horrible loss possible,” Rubenstein said. The “maximum sentence” should be imposed.

Gabrielle Pena stood silently and solemnly outside the Court with Rodriguez. She declined answering questions from the press.

A follow-up Court hearing has been scheduled for Wednesday, September 10.