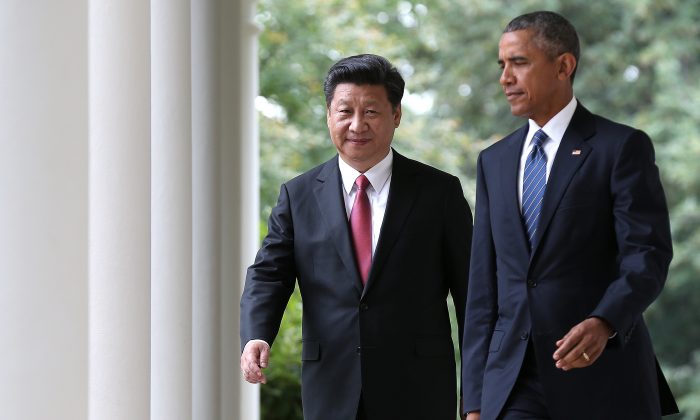 Victims of China’s Religious Liberty ‘Crackdown’ Appeal to Obama—But Will He Help?

Earlier this week, as devout American Catholics took to the streets of Washington to celebrate the arrival of Pope Francis, four Chinese human rights activists sat in a small, plain congressional office room on Capitol Hill.

There were neither barricades nor the glaring lights of news camera crews at the press conference hosted by China Aid, an international Christian human rights group.

Two translators were on hand to assist non-English-speaking panelists in telling their stories.

“During the Ramadan of last year, August of 2014, in the town of Yarkand [in Xinjiang region], China’s security forces broke into a house of Uyghur families and started shooting,” said Rebiya Kadeer, president of the World Uyghur Congress, via a translator. “Including a 7-year-old, 12 people were killed.”

According to Kadeer, whose flat palm tapped rhythmically against her leg throughout the event, the Uyghur people—a Muslim, Turkic ethnic minority within China—have faced increasingly violent persecution by a Chinese government that fears radical ties to extremist groups like ISIS. The Washington Post reported that, also during last year’s Ramadan holiday, Chinese authorities forced Uyghur university students to break fast.

“Uyghur villagers from three different villages took to the streets to protest against such brutality,” Kadeer continued, her small stature accented by two long, gray braids winding down her back. “We learned from villagers that the Chinese government used armed helicopter gunships to attack the villages, killing many.”

“This is not just happening in our [Uyghur] homeland,” she stressed. “Similar things are happening in other parts of China and Tibet.”

Indeed, the other panelists at the press conference, held on the eve of Chinese President Xi Jinping’s arrival in D.C. to discuss cybersecurity, detailed a systematic, government-sanctioned “crackdown” on religious liberty and expression within China.

But it remains to be seen if President Barack Obama and President Xi discuss the purported abuse. While White House officials said the topic of human rights would be on Obama and Jinping’s official agenda, the two world leaders’ opposing viewpoints could threaten the countries’ important trade relationship or rumored cybersecurity deal.

Experts like Olivia Enos, a research associate in the Asian Studies Center at The Heritage Foundation, argue that a Chinese visit to American soil without large policy deliverables at stake would be the perfect time to prioritize human rights abuses.

“If we don’t have any huge policy objectives in mind [aside from addressing cybersecurity hacks], this is a great opportunity to recalibrate our policy to ensure that human rights plays a fairly important role among the other many important strategic issues we’re focused on,” Enos said, referring to trade and security.

Also on Wednesday, Bhuchung K. Tsering, vice president of the International Campaign for Tibet, spoke of the plight of Buddhists in China who, as the United States Commission on International Religious Freedom (USCIRF)’s 2015 Annual Report outlines, face “harsh policies of repression” that span “the Tibetan plateau, including harassment, imprisonment, and torture.”

Pastor Jonathan Liu, a former government-sanctioned church leader in China, and Pastor Guo Baosheng, a former “prisoner of conscience,” imprisoned for his Christian beliefs, detailed the destruction of religious property that Christians in China have endured.

“For the Christian community, there has been a government-sanctioned campaign to destroy crosses and churches,” Pastor Baosheng—holding up a small, red cross as he spoke—said via a translator. “Over 1,500 [crosses and churches combined], and that’s a low estimate, have been destroyed in Zhejiang province and several other provinces. There is documentation to show that this is something that’s coming from the government.”

While China maintains that its constitution protects religious freedom, the nation is officially atheist. Chinese law requires religious organizations register with the government and fall under the umbrella of one of five “patriotic religious associations” recognized by the state: Buddhism, Taoism, Islam, Catholicism, and Protestantism.

“House churches,” those groups that are not legally registered, have reportedly long been a target of government harassment. But as the USCIRF report outlined, Xi Jinping has allegedly launched a new wave of persecutions against Christians that can be described as “the most egregious and persistent since the Cultural Revolution.”

Enos called the campaign a “systematic consolidation of power” in an interview with The Daily Signal.

“Christianity, both Protestantism and Catholicism, have a long history of overthrowing communist regimes, especially in the post-Soviet block,” Enos said. “Most communist regimes view religion as a threat to their stability, and I think that’s why you see persecution of these minorities.”

An unintended outcome of the apparent persecution is the unification of the religious minorities within China. Kody Kness, vice president of China Aid, called the collaboration “unprecedented.”

“What’s been unique over the last year, year and a half, is that while traditionally the government has, for the Christian community, persecuted and harassed house-church leaders and house churches, they have now began to forcibly close and arrest members of officially-sanctioned churches,” Kness said. “So now these two communities, those in the house-church movement and those in the government-sanctioned churches, are coming together.”

Like Enos, Kness argues that Obama should use his face time with Jinping to call for an end to the religious registration process as well as an enforced respect for “the rule of law”—referring to the 220 human rights lawyers imprisoned in China beginning this past July. According to Kness, Obama should ask that both prisoners of conscience and human rights lawyers be released.

“There are a number of issues that we can engage on with the Chinese in addition to trade or other bilateral considerations,” Kness said. “Human rights has to be one.”