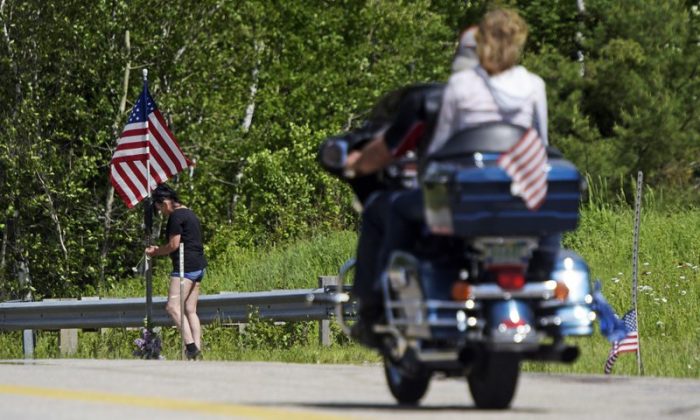 A motorcycle passes as a woman leaves flowers at the scene of a fatal accident on Route 2 in Randolph, N.H., on June 22, 2019. (Paul Hayes/Caledonian-Record via AP)
US News

All the victims were associated with the Marine JarHeads, a motorcycle club mostly made up of Marines and their relatives, according to Fox News.

The victims of the wreck Friday evening were members or supporters of the Marine JarHeads — a New England motorcycle club that includes Marines and their spouses — and ranged in age from 42 to 62. https://t.co/6KIJu3q4bn

New Hampshire Governor Chris Sununu has ordered all flags on public buildings and grounds in the State of New Hampshire to fly at half-staff from sunrise until sunset on June 24 in mourning of the seven victims.

“Friday’s tragedy has struck our state and our citizens in a profound way,” said Governor Chris Sununu. “I want to express our sincerest condolences and prayers to the victims and their families. Words cannot express the grief we all share in the loss of these seven individuals. The State will ensure that the families affected will have the necessary resources to provide closure to this tragic event.”

“Our thoughts and prayers are with the victims, their families, & first responders who answered the call,” he wrote on Twitter.

Valerie & I are deeply saddened to hear of the tragic motor accident that occurred in Randolph tonight. Our thoughts and prayers are with the victims, their families, & first responders who answered the call. State officials are on the scene & assisting as the situation develops.

The accident occurred at about 6:30 p.m. EDT on Friday when a Dodge pickup traveling west collided with several of the motorcycles traveling east on a state highway in Randolph, state police said in the press release. The area is just above the White Mountains, about 120 miles north of Manchester.

The driver of a truck in a crash that killed seven motorcyclists has been charged with seven counts of negligent homicide. https://t.co/c0jQgj8ISp

The Dodge truck driver was identified as 23-year-old Volodymyr Zhukovskyy of West Springfield, Massachusetts, Deputy Attorney General Young said in a statement. Zhukovskyy was arrested at his home on Monday morning by the state police and was charged with seven counts of negligent homicide.

In addition to the seven deaths, New Hampshire state police confirmed that another three people were hospitalized. Two of them were released Saturday and another was in stable condition, reported Fox News.

“This is one of the worst tragic incidents that we have investigated here in the state,” New Hampshire State Police Col. Chris Wagner said at a Saturday news conference in nearby Lancaster. “It’s going to be a very lengthy investigation.”