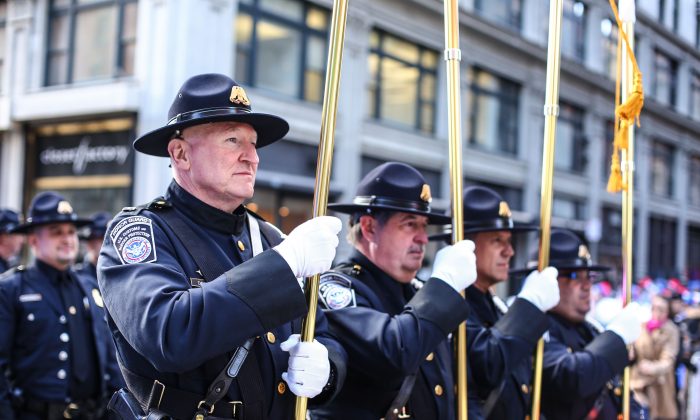 NEW YORK—The pop of the snare drum, the boom of the bass drum, and the sound of marching footsteps echoed down Fifth Avenue Friday, as crowds lined up and waved their American flags to say thank you during the annual Veterans Day Parade in which over 25,000 marched in.

Mayor Bill de Blasio was in one of the first processions. Prior to the parade, de Blasio laid a wreath at the Eternal Light Monument in Madison Square Park. The monument commemorates the signing of the Armistice on November 11, 1918, which officially ended World War I.

The theme of this year’s parade was commemorating the the 15th Anniversary of 9/11, with special recognition of the troops from Afghanistan, Iraq, and other post 9/11 veterans. This year is also the 25th Anniversary of the Desert Storm operation.

The groups who participated in the march spanned from veterans of all eras, military units, civic and youth groups, businesses, top high school marching bands, along with various ethnic groups who really take to heart the freedom we have here in the United States.