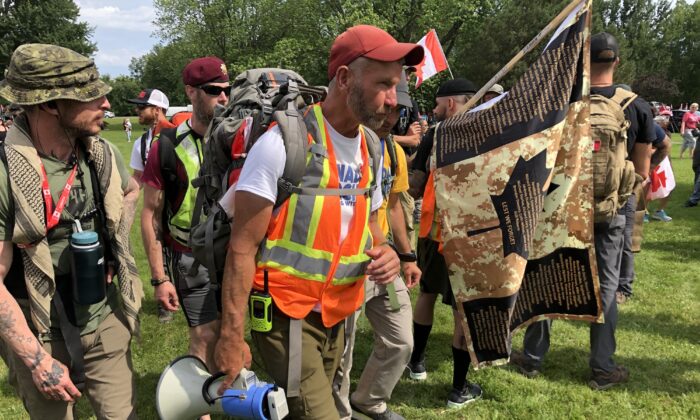 Military veteran James Topp walks with supporters toward his last stop on his march to protests vaccine mandates, the War Memorial, in Ottawa, on June 30, 2022. (Noé Chartier/The Epoch Times)
Canada

Military veteran James Topp, who is currently walking the eastern leg of his cross-country march to protest vaccine mandates, is asking Defence Minister Anita Anand to set up a board of inquiry into the military’s mandate.

“I have firsthand knowledge of the damage being perpetrated to the institution of the CAF [Canadian Armed Forces],” wrote Topp in the Sept. 12 letter.

“I would like to bring information to your attention intended to assist you and the Chief of Defence Staff in making the decision to apply the 3R formula … In doing so, all of our soldiers, sailors, and aircrew can witness and begin the healing process to restore trust in our chain of command.”

The “3R” refers to repealing the mandates, reinstating employees, and restitution for wages lost “to foster societal Repair,” says Topp.

The federal government suspended the mandate for the public sector on June 20, warning it could be brought back in the fall if deemed necessary.

The mandate for the CAF remains in place, though a modification to the policy could come in the near future after the leak of a draft directive in late July suggested the organization would align with the public sector.

A full suspension isn’t certain though, with Chief of Defence Staff Wayne Eyre saying in August there would be a “tweak” in the policy.

An unidentified Department of Defence spokesperson told The Epoch Times on Sept. 13 that “no decision has yet been made on the vaccine mandate.”

Topp says the aim of setting up a board of inquiry would be to assess the impacts of the mandate on the fighting strength of the armed forces.

Hundreds of soldiers have voluntarily released or were dismissed under code 5f (“unsuitable for further service”) for not conforming to the mandate.

Topp was affected by the military mandate and the public sector one through his civilian employment in the RCMP.

The warrant officer is facing a court martial after being charged with two counts of conduct to the prejudice of good order and discipline for publicly speaking against the vaccine mandates in February. He was in military dress uniform when he did so.

Topp completed his initial trek from Vancouver to Ottawa on June 30.

His advocacy didn’t garner much media attention throughout that leg, but around the time he arrived in Ottawa, some media outlets started reporting on him and have attempted to paint Topp as an extremist.

“People should be aware of the issue of this corporate media and its indirect censorship of dissenting voices—that’s what I see happening here. There’s a lack of coverage and any coverage is largely derogatory,” Topp told The Epoch Times.

Topp says he’s had “enough of this kind of bully pulpit reporting.”

After completing his initial journey to the War Memorial in late June, Topp headed to Newfoundland in July to complete a full cross-country trek and connect with more people along the way.

There, he faced some resistance, with detractors calling venues he had secured to meet people and telling the owners or managers that Topp holds extremist views.

“It’s apparent to me that we have a press that’s acting as an information arm of federal government and that anybody who speak out on issues is vilified or discredited or misrepresented, which is why we’ve had these kind of accusations, misinformation,” Topp says.

He says the situation improved in Nova Scotia, with supporters successfully pushing back against the interference.

“Because I’ve already met with a lot of the owners of the venues and explained to them who I am and what I’m doing and why, most of them are willing to stand up against these bullying tactics and to no detriment whatsoever to their business,” he says.

Topp was reached while in New Brunswick, closing in on 6,000 kilometers of marching.

He says he plans on arriving in Ottawa at the beginning of November, where he says he would like to be invited again. Canada celebrates Remembrance Day on Nov. 11.

Topp was joined by thousands of supporters on the last day of the first half of his journey in Ottawa on June 30.

He says he’s working toward helping the Support our Troops campaign and he hopes to meet again with parliamentarians. A group of Conservative MPs met with him on June 22.