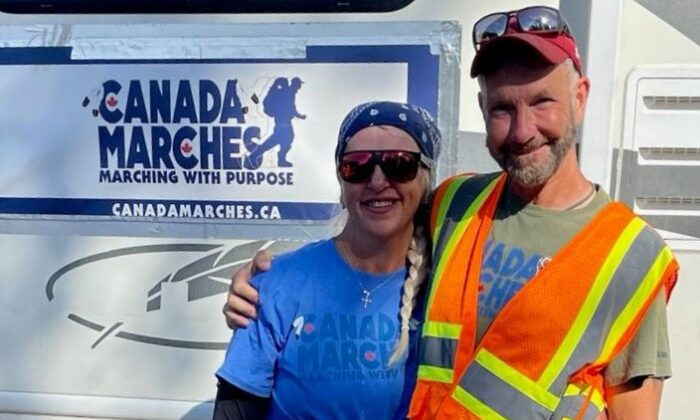 ‘It’s Not Going to Dissuade Me,’ Says James Topp of Efforts to ‘Cancel’ Him as He Marches Through Newfoundland

James Topp, the military reservist who marched from Vancouver to Ottawa to protest federal government COVID-19 vaccine mandates, has faced organized efforts to cancel his appearances since he embarked on a new leg of his trek in Newfoundland and Labrador.

Having begun the second phase of his journey from iconic Signal Hill overlooking St. John’s on July 18, Topp and his team have encountered mixed reactions from some venues where he has been scheduled to speak and meet with supporters.

Although many of his appearances have still been held without protest or complaint, some businesses and a handful of local town councils have cancelled his events citing reasons such as maintenance problems, staffing shortages, and permit violations, his organizers said.

The pushback in Newfoundland and Labrador, which Topp thinks is being purposely orchestrated to portray him in a negative light, is largely a new experience for him, as his march across Western Canada was met almost entirely with support, he says.

“On the ground, I am seeing a lot of support from motorists passing by, but the online space is a completely different experience,” Topp told The Epoch Times.

“Two people online can actually do the work of 100. They’re the ones who have, as I understand it, been responsible for contacting business owners and even members of town councils in the various towns we’ve travelled through at this point. I just know that I was portrayed by them in such a way that the instinct of a local politician or business owner is to say, ‘Okay, well I don’t want to be associated with him.’”

Opponents of Topp’s march have been particularly active on social media, asking their followers to pressure businesses and local governments to ban his gatherings, and claiming he works alongside neo-Nazi organizations and other hate groups that threaten people with physical harm if they don’t support his march.

He’s been branded “Everyone’s favorite #freedumb figure,” and “Forrest Topp,” among other derogatory labels. Those behind the campaign to cancel Topp celebrated when town councils in Gander and Clarenville told his team they weren’t welcome to host any meetings on city property.

“We just work around it as much as we are able to,” said Topp, who hails from Hope, B.C.

“This isn’t going to derail me from what I’m doing, but it is definitely happening and I think it is a direct challenge to free speech in this country. This is where we’ve descended into that which people are afraid of, of hearing what they have to say. And that disturbs me as well.”

Topp said he would like to contact some of the people working against him online to understand their point of view. The Epoch Times reached out to several people and organizations promoting the cancellations of his events, but did not receive any responses. Requests for comment from the town councils of Clarenville and Gander also did not get any replies.

“I can’t say it doesn’t affect me,” he says. “It affects me deeply because I can’t understand why this much effort is going into actively cultivating this misinformation about me because number one, it’s not even remotely true. Number two, why? Because I’m protesting against a policy that is unbelievably destructive and harmful? I can’t get my head around it to be perfectly honest.”

Andrew MacGillivray is one of the founders of Veterans 4 Freedom, which is supporting Topp and his march. Speaking to The Epoch Times, MacGillivray said any effort to cancel Topp won’t succeed.

“One of the things all of us veterans bring to the table is our resilience. A lot of our guys have taken incoming enemy fire, right? And if they think that their little, blue checkmark and assaults and stuff like that are going to affect people in our group, they’re sadly mistaken,” he said.

The attempts to portray Topp and his Canada Marches team negatively have baffled Dr. Lana Nicoll, a representative with Taking Back Our Freedoms and also a supporter of Canada Marches, Topp’s group. Nicoll is one of Topp’s main organizers handling duties including creating and distributing promotional materials, bookings, and his meeting with several Conservative MPs back in June.

“I was stunned when I first heard that this was happening. I was literally shocked. Who would do that, to disrespect a 28-year army veteran, like, what would possess you to do that? So this really stunned me from what I’ve witnessed and seen, [considering] the beautiful support up until now,” Nicoll said in an interview.

“And it saddens me, too, because I met James and spent time with him and all of the Canada Marches team, and they have the biggest hearts. If people actually knew them and took some time to know about their humanity, what they stand for, and the quality of people they are, there’s no way they would be doing that.”

Lola Parsons, who lives in St. John’s and has been following Topp since his initial journey began in Vancouver, told The Epoch Times she is marching with him daily as he crosses Newfoundland and has witnessed far more support than opposition.

“It’s just incredible to see all these people coming out to support James and what he’s doing. We’re waving as much as we’re marching,” she said.

Topp worked as a civilian with the RCMP but is currently suspended for refusing to disclose his vaccination status. A 28-year veteran of the Canadian Armed Forces (CAF) who served in Afghanistan, Topp is also facing a court martial for publicly speaking against federal mandates while in uniform.

Topp continues to encourage Canadians to contact their MPs to advocate for the removal of COVID-related restrictions and stigma, while his objective is to represent the Canadian Armed Forces servicemen and women who have had their careers affected because of similar government mandates.

While the support he has received since he began his cross-country trek in February has been reassuring, Topp decided to resume his march after he woke up on Canada Day recognizing his mission wasn’t finished, particularly with the military personnel he vowed to represent who still haven’t been allowed to return to the CAF, with many facing the stigma of being released under code 5F, “unsuitable for further service.”

He and his team plan to make their way through the Maritimes and Quebec before likely finishing somewhere in Southern Ontario.

Topp says the speedbumps in Newfoundland and Labrador won’t hinder his mission as the support he continues to receive outweighs the efforts to silence him.

“It’s not going to dissuade me or stop me from what I’m doing,” he said.