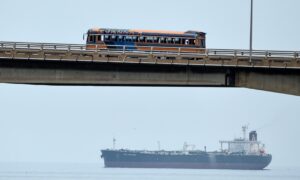 Oil Tankers Turn Away From Venezuela as More Sanctions Loom
0 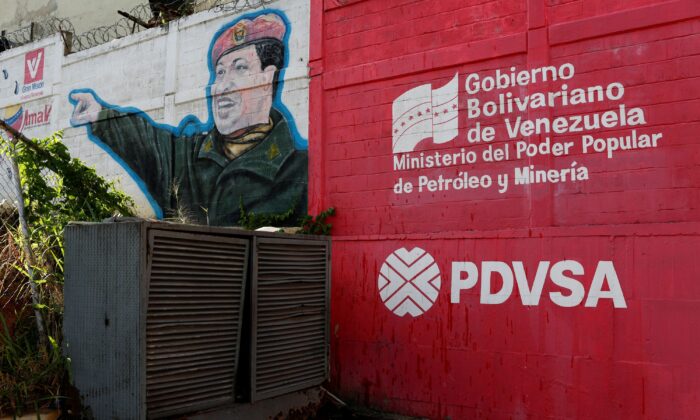 The logo of the Venezuelan state oil company PDVSA is seen next to a mural depicting Venezuela's late President Hugo Chavez at a gas station in Caracas, Venezuela, on March 2, 2017. (Carlos Garcia Rawlins/Reuters)
Americas

Venezuela’s oil exports have fallen nearly 28 percent in the first half of June, on course for the lowest level in over 70 years as tanker owners and operators suspend contracts for transporting crude oil, according to documents and data on June 16.

Shipping firms are avoiding Venezuela after the United States earlier this month blacklisted four vessels and their owners for transporting the country’s crude.

Several shippers have turned tankers away from Venezuela’s waters in the face of increasingly aggressive U.S. efforts to isolate and oust socialist President Nicolas Maduro by throttling the oil revenue that funds his government.

State oil firm PDVSA and its partners in joint ventures have exported seven cargoes of crude and fuel so far in June to long-time customers including Italy’s Eni, Spain’s Repsol, and Cuba’s state-run Cubametales, according to internal company documents and Refinitiv Eikon data.

That is an average of 325,000 barrels per day (bpd), down from the 17-year low of 452,000 bpd in May. If this level of exports continues for the rest of the month, the average could be the lowest seen since the 1940s. Monthly data is not available from before 2000, but annual averages were last around these levels in 1942-1945, according to data reported by Venezuela’s oil ministry.

In early 2019, before sanctions, Venezuela exported about 1.4 million bpd, according to Eikon data. The nation no longer publishes monthly data on production or exports.

As of Monday, PDVSA and vessel operators had canceled five other cargoes scheduled to load this month, according to company documents.

The fall in exports has forced PDVSA to cut output because storage is full.

Among the seven cargoes that have sailed is the Liberia-flagged Respect, whose commercial manager is NGM Energy SA. It loaded 2 million barrels of Venezuelan heavy crude, the data showed.

Two vessels managed by Greece-based firm Delta Tankers Ltd, the Delta Med and the Delta Captain, also departed for Europe this month, while another three operated by the same company are loading or headed to Venezuela.

PDVSA, Venezuela’s oil ministry, and Cuba’s government did not immediately reply to requests for comment.

Repsol, which along with Eni has received Venezuelan oil as repayment for dividends and debt, said the company is fully compliant with international laws and regulations.

Eni confirmed it plans to take two Venezuelan oil cargoes this month as part of a “receivables recovery plan.” It said it is in full compliance with U.S. sanctions and in continuous dialogue with U.S. authorities.

NGM Energy, which earlier this week said it had diverted tanker Commodore away from Venezuela as part of a policy against servicing vessels intending to call at the country without U.S. authorization, told Reuters that tanker Respect completed loading at a PDVSA port on May 31, before Washington’s most recent round of Venezuela-related sanctions.

Delta Tankers did not reply to information requests.