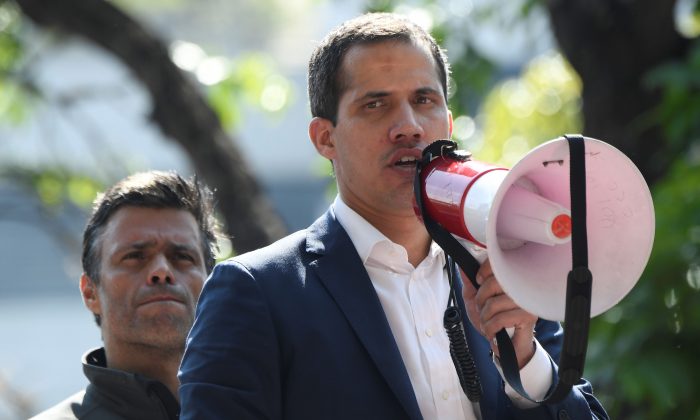 US Officials Offer Support to Guaidó in Liberation of Venezuela

Guaidó’s plan to bring freedom to the country took on new life as he gathered on the streets with a small contingent of heavily armed troops and called for Venezuelans and the military to rise up.

Joining him was activist Leopoldo Lopez, who had been detained since 2014 for leading protests against Maduro. One on-the-ground reporter said the “entire city” was mobilized in support of Guaidó.

“I want to tell the Venezuelan people: This is the moment to take to the streets and accompany these patriotic soldiers,” said Lopez. “Everyone should come to the streets, in peace.”

Bolton meanwhile urged the National Bolivarian Armed Forces to “protect the Constitution and the Venezuelan people.” He also asked them to stand by Venezuela’s National Assembly and legitimate institutions against what he called “the usurpation of democracy.”

“We are with you! America will stand with you until freedom & democracy are restored,” Pence said on Twitter, in part, to Guaidó.

To @jguaido, the National Assembly and all the freedom-loving people of Venezuela who are taking to the streets today in #operacionlibertad—Estamos con ustedes! We are with you! America will stand with you until freedom & democracy are restored. Vayan con dios! #FreeVenezuela

.@vladimirpadrino: The FANB must protect the Constitution and the Venezuelan people. It should stand by the National Assembly and the legitimate institutions against the usurpation of democracy. The United States stands with the people of Venezuela.

As Guaidó spoke on a highway overpass, troops loyal to Maduro sporadically fired tear gas from inside the adjacent Carlota air base at a crowd of a few hundred civilians, as some of them scurried for cover.

The crowd swelled to a few thousand as people sensed what could be their strongest opportunity yet to overthrow the government after months of turmoil that has seen Maduro withstand an onslaught of protests and international pressure with the support of his top military command and allies such as Russia and Cuba.

Guaidó said troops who had taken to the streets were protecting Venezuela’s constitution. He said that he would soon release a list of top commanders supporting the uprising.

“The armed forces have taken the right decision,” said Guaidó. “With the support of the Venezuelan people and the backing of our constitution, they are on the right side of history.”

#Venezuela
People at the La Carlota military base receiving defected soldiers as liberators.#OperaciónLibertadpic.twitter.com/61ZJJxi1zu

As part of the “Operation Freedom” phase, Venezuelans were called to pour into the streets, especially to the country’s capital. Armed military units loyal to Guaidó were seen positioning themselves to defend the La Carlota base in Caracas, where he was stationed.

On-the-ground footage showed some of Maduro’s military forces deserting their posts and joining Guaidó, who is internationally recognized as the legitimate president with the backing of more than 50 nations.

At the same time, other footage showed pro-Maduro forces appearing to fire at Venezuelan protestors. There were no immediate reports of injuries.

Speaking to reporters outside the White House on April 30, Bolton said what’s happening is “clearly not a coup,” referring to Guaidó’s legitimacy as interim president. He added that “all options remain on the table” and said it’s possible that the situation could persist.

“If this effort fails, they will sink into a dictatorship from which there are very few possible alternatives. It’s a very delicate moment,” he said.