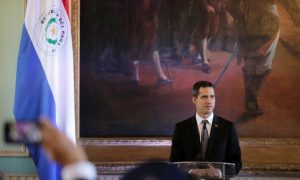 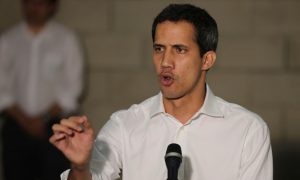 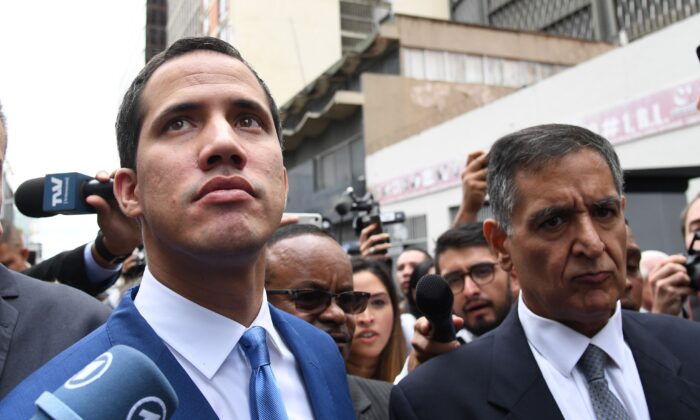 Venezuelan opposition leader Juan Guaido, who many nations have recognized as the country's rightful interim ruler, arrives at the National Assembly in Caracas, where he is due to be voted in for a second term as parliament speaker, on Jan. 5, 2020. (Yuri Cortez/AFP via Getty Images)
Americas

Opposition leaders had expected to re-elect Guaido, recognized by more than 50 countries as Venezuela’s legitimate leader, to a second term as chief of the legislature to continue pushing for the ouster of unpopular President Nicolas Maduro.

Following a confused scuffle on the floor of parliament on Sunday, state television announced that the new parliament leader was Parra—a legislator expelled last month from an opposition party following corruption accusations that he denies.

“Luis Parra… has been sworn in during this session today,” said a state television announcer, following an improvised swearing-in ceremony amid clamoring and what appeared to be protests by opposition legislators.

Opposition leaders said the incident showed that Maduro has again flouted basic democratic principles by using intimidation and force to control an institution that the Socialist Party lost control of in a landslide 2015 election.

One video distributed by Guaido’s press team shows him attempting to scale a fence outside parliament and being pushed back by security forces. He declared the new congress illegal and said he will continue holding sessions elsewhere.

But the gambit will help Maduro to sideline Guaido, who last year became an icon of hope for millions of Venezuelans seeking an end to the country’s hyperinflationary crisis that has fueled an exodus of some 5 million citizens.

Guaido’s claim to the interim presidency rested on his position as president of the opposition-held National Assembly. He argued that Maduro’s 2018 re-election was fraudulent, meaning the presidency was vacant and that the constitution dictated the head of parliament should take charge temporarily.

The United States, through its embassy to Venezuela which has been located in Bogota since the two countries cut off diplomatic relations in 2019, said Sunday’s events in the National Assembly were “completely against the will of the people and the laws governing the process.”

Since being expelled from the Justice First opposition party, Parra has been harshly critical of Guaido’s leadership. He and eight other legislators who were also ensnared in the corruption scandal have described themselves as being in “rebellion.”

Parra told state television that the lawmakers who were present in the chamber opened the session without Guaido because he had not arrived.

“We announced this morning before entering the legislative palace that the rebellion of the deputies … would be clearly expressed,” Parra said.

Guaido in December vowed to investigate alleged wrongdoing by lawmakers including Parra for unduly advocating for a businessman linked to Maduro’s regime.

By Mayela Armas and Brian Ellsworth