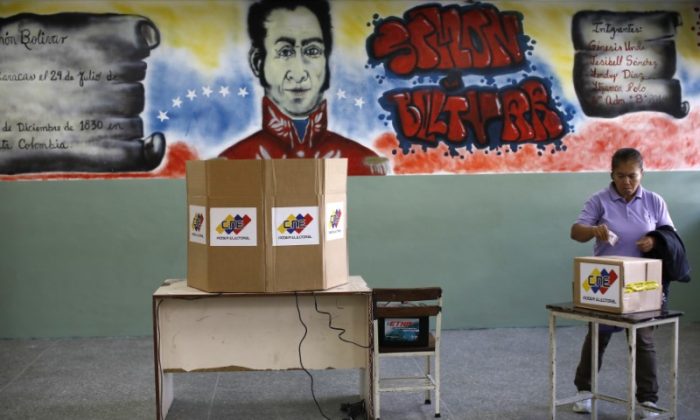 A woman casts her vote at a polling station during the Constituent Assembly election in Caracas, Venezuela, July 30, 2017. (Reuters/Carlos Garcia Rawlins)
Americas

CARACAS—Only 3.7 million people had voted by 5.30 p.m. in Venezuela’s controversial Constitutional Assembly election on Sunday, according to internal electoral council data reviewed by Reuters, casting doubt on the 8.1 million people authorities said had voted that day.

The election of the legislative super-body has been decried by critics as illegitimate and designed to give the unpopular government of President Nicolas Maduro powers to rewrite the constitution and sideline the opposition-led congress.

In response to the vote, the U.S. government slapped sanctions on Maduro on Monday, calling him a dictator for “seizing absolute power.”

The low turnout would be a major indictment of Maduro, especially after the opposition last month held its own unofficial vote in which it said more than 7.5 million voted against the government’s controversial assembly.

“Although it’s possible to have a late push at the end of the day, and the Socialist Party has tried to do that in the past, to double the vote in the last hour and a half would be without precedent,” said Jennifer McCoy, a political scientist who led several election observation missions to Venezuela for the Atlanta-based Carter Center.

The electoral council extended voting to 7 p.m. but some centers are thought to have stayed open longer.

Venezuelan authorities did not respond to a request for comment on the voting data.

Venezuela is undergoing a major crisis, with millions suffering food shortages, soaring inflation and months of anti-government unrest, making it more unlikely that such a positive turnout was obtained by the government.

Authorities had heavily pressured state workers to vote, even threatening them with dismissal if they failed to do so. Several workers received phone calls from bosses or colleagues late in the day pushing them to vote.

And electoral experts took issue with the vote process, which they say was riddled with irregularities. Many, including a member of the electoral council, questioned the count.

“For the first time since I took up this commitment to the country, I cannot guarantee the consistency or veracity of the results offered,” said Luis Rondon, one of five directors of the electoral council in a statement on social media.

The country’s chief prosecutor Luisa Ortega, long an ally of the government, also cast doubt on the figures.

“I’m absolutely sure that those numbers are not correct,” she said on Monday. “What they announced was a mockery of the people.”

Opposition leaders, who boycotted the vote, say there was outright fraud. They estimated only around 2.5 million people voted, while investment firm Torino Capital puts the figure at 3.6 million based on exit polls.The opposition has long complained that the electoral council allows unfair use of state resources in favor of the ruling Socialist Party and have in recent years questioned results.

Nearly five months of demonstrations failed to stop Maduro carrying out the weekend election and the opposition is now looking to the military to see if it will pressure Maduro to enact its demands, which include presidential elections.

More than 120 people have been killed in the protests, drawing international condemnation of the security forces’ heavy-handed tactics.