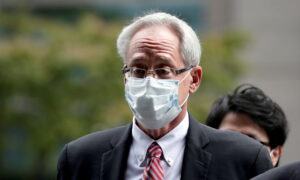 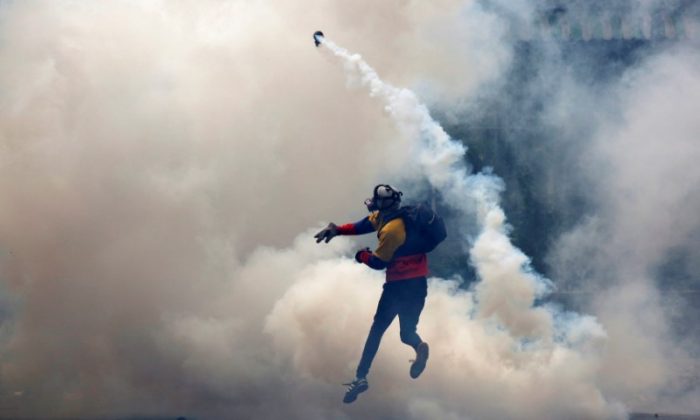 An opposition supporter clashes with riot police during a rally against President Nicolas Maduro in Caracas, Venezuela on May 8, 2017. (REUTERS/Carlos Garcia Rawlins)
International

CARACAS—Venezuela’s opposition boycotted a meeting on Monday to discuss President Nicolas Maduro’s plan for a new popular assembly, preferring to protest in the streets where they were again blocked by security forces firing tear gas.

In familiar scenes from five weeks of unrest, youths with gas masks and makeshift shields faced off with police and National Guard troops in Caracas, after hundreds of demonstrators were stopped from reaching government offices.

In Venezuela’s second city Maracaibo, a crowd of about 300 protesters shouting “Maduro Out!” and “No to Dictatorship!” was dispersed with multiple volleys of tear gas.

The 54-year-old successor to Hugo Chavez says his foes are seeking a coup with U.S. support. He is setting up a “constituent assembly” super body with power to rewrite the constitution and shake up public powers.

But no representatives of the opposition Democratic Unity coalition went to the Miraflores presidential palace on Monday despite an invitation from Education Minister Elias Jaua who is leading the constituent assembly process.

“It’s a trick to keep themselves in power,” said Julio Borges, leader of the National Assembly legislature where the opposition won a majority in 2015.

“The only way to resolve this crisis is with a free vote.”

The unrest has killed at least 37 people since early April, including protesters, government sympathizers, bystanders, and security forces. Hundreds have also been hurt and arrested.

Local rights group Penal Forum said 1,845 people had been detained since April 1 over the protests, with 591 still behind bars. Opposition leaders said 200 of those were being processed by military tribunals in Carabobo state.

Perhaps to justify the use of those military tribunals, officials say they are now facing an “armed insurrection”. Red-shirted Maduro supporters also rallied in Caracas on Monday.