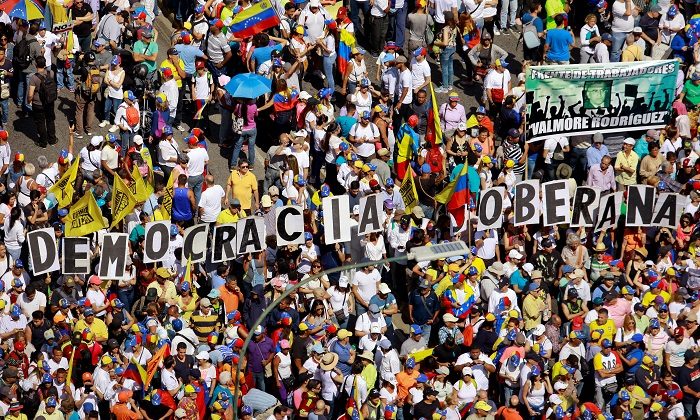 CARACAS – A high-ranking Venezuelan general called on the armed forces to rebel against President Nicolas Maduro and to recognize the opposition leader Juan Guaido as the interim chief as huge crowds rallied against the head of state, adding pressure on Maduro to step down.

The military’s support is crucial for the embattled Maduro, who is deeply unpopular largely due to an unprecedented economic crisis that has prompted an exodus of millions, but claims he is victim of a coup directed by the United States.

The general’s defection came as tens of thousands of opposition supporters, many sporting clothes in the yellow, blue and red colors of the Venezuelan flag, turned out at rallies nationwide to protest against Maduro and show support for Guaido.

Washington, along with many countries in the western hemisphere, has recognized Guaido as the legitimate president, arguing that Maduro stole his second term, and imposed potentially crippling sanctions this week that are likely to further weaken the OPEC nation’s struggling oil industry.

While small rebellions against Maduro have broken out in Venezuela’s armed forces in recent months, there has been no large scale military uprising against him.

“Given the happenings of the last few hours, already the transition to democracy is imminent.”

Yanez is the first active Venezuelan general to recognize Guaido since he proclaimed himself president on Jan. 23. Venezuela’s chief military attache to the United States also said he was defecting last week.

“We are going to send a very clear message in all the municipalities of Venezuela and in each city of the world, we are going to give a demonstration of strength, in a pacific and organized manner,” Guaido tweeted on Saturday.

Mireanna Fernandez, a 20-year-old student at a protest in the eastern city of Ciudad Guayana, said before Guaido’s Jan. 23 proclamation she wanted to leave Venezuela, but now she had hope that Maduro’s government would end.

“I have no quality of life, I can’t go out onto the streets, my university is falling apart, they’ve closed classrooms, there are no teachers,” she said.

Maduro on Saturday will also hold a rally to commemorate the 20th anniversary of late socialist leader Hugo Chavez’s first inauguration as president in 1999.

“Today is the anniversary of 20 years of work, fight, advances and important achievements, despite the difficulties and imperial conspiracies,” the president said on twitter.

Supporters of the “chavismo” movement founded by Chavez gathered in Caracas’ Bolivar avenue for the government rally on Saturday morning.

“For us Venezuelans, there is only one president – President Nicolas Maduro,” said Gregory Carrasquel, 35. “The other is someone who is being led to carry out a coup.”

“(U.S. President Donald) Trump is imposing measures because he is the dictator of the world and thinks we are his slaves.”

Washington has imposed sweeping sanctions on state-owned oil firm PDVSA in the toughest financial challenge yet to Maduro, as the Trump administration openly seeks to push him from power.

Venezuela is suffering from hyperinflation, produce shortages and a mass migration of citizens to neighboring Latin American countries – a situation likely to be worsened in the short term by the new sanctions.

Guaido swore himself in as interim president in a direct challenge to Maduro’s rule, but still has no control over state institutions or any functions of day-to-day governance.

Maduro’s adversaries say he has run roughshod over democratic institutions, including the opposition-run congress, and destroyed the once-buoyant economy through a corruption-riddled exchange control system and arbitrary nationalizations.