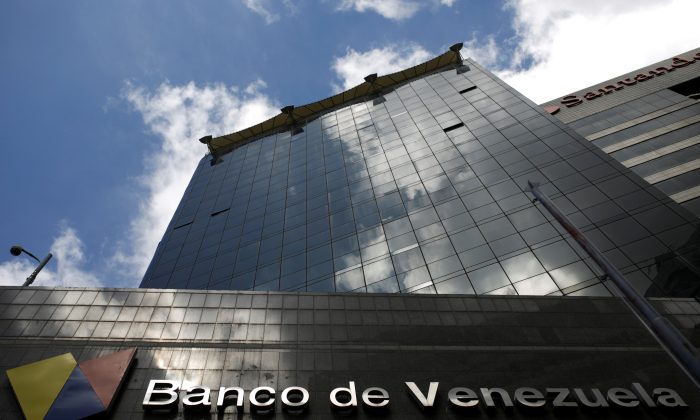 The logo of Banco de Venezuela is seen in a building in Caracas, Venezuela on March 14, 2017. (REUTERS/Marco Bello)
International

CARACAS/MEXICO CITY—Venezuela’s government is using little-known banks, including a small Puerto Rican lender, as intermediaries for some international trade operations after Citigroup <C.N> last year stopped providing such services, according to the owner of one of the banks and government officials.

The government has turned to relatively unknown institutions to provide a service known as correspondent banking, as international banks are increasingly concerned about the risks of doing business with socialist-ruled Venezuela amid investigations into corruption and drug trafficking.

It also coincides with complaints by President Nicolas Maduro that Venezuela is struggling to obtain financial services amid a severe economic crisis characterized by triple-digit inflation and chronic shortages.

Government officials call the drug allegations a campaign against their administration by ideological adversaries in the United States, and insist Venezuela’s problems are being caused by an “economic war.”

The situation does not affect payment of state oil company PDVSA’s high-yielding bonds, which continue to be serviced by Citi due to contractual obligation, according to a 2016 letter from Citi to PDVSA bondholders seen by Reuters.

The country’s relationship with global banks is also complicated by a 14-year-old currency control system that requires businesses to acquire dollars through the government rather than private banks.

Correspondent banks provide an essential service that allows countries to import goods and maintain links to the global financial system. Italbank, the Puerto Rican lender owned by Venezuelan entrepreneur Carlos Dorado, has served as one for Venezuela since 2016.

“Our clients include private sector banks and state-run banks. One of those clients is Banco de Venezuela,” said Dorado, who also owns Venezuelan currency exchange house Italcambio and a fashion business that distributes high-end clothing.

He said about 10 or 15 percent of the dollar transfers from Banco de Venezuela go through Italbank.

He added that another bank being used for correspondent services include southern Florida-based Eastern National Bank, partly owned by Venezuelan bank regulator Sudeban.

A government official with knowledge of the transactions, who asked not to be identified, confirmed Eastern National was providing such services.

Eastern National did not respond to emails and phone calls seeking comment. Nor did Sudeban, Venezuela’s central bank, or its Information Ministry, which handles queries on behalf of the Finance Ministry.

“Thanks to Dorado we have been able to pay for food imports,” said a person close to the Venezuelan government who asked not to be identified, adding that the bank “has processed hundreds of millions of dollars in payments.”

Italbank opened in 2008 and says on its website it is focused on the Latin American market. It has a single office in San Juan and largely carries out operations online or by telephone. It operates under an offshore banking license in Puerto Rico, a U.S. territory.

That gives it access to U.S. Federal Reserve payment services, allowing it to channel Venezuelan payments to foreign providers.

Dorado said Italbank has an account with the Fed, but has to conduct transactions manually rather than electronically, which limits the volume of operations it can handle. He says the bank’s procedures comply with U.S. financial regulations.

PDVSA did not use Citi as a paying agent for a new bond issue last year, relying instead on Law Debenture Trust Company of New York, a provider of fiduciary services, according to the bond’s prospectus.

Wall Street banks worry that providing services to Venezuela could leave them with indirect financial links to the nation’s commercial and political allies such as Cuba and Iran, which face various international sanctions, according to finance industry experts consulted by Reuters.

They added that scandals—including U.S. authorities’ designating Venezuelan Vice President Tareck El Aissami as a “drug kingpin” and the drug-related arrests of two nephews of the first lady—have boosted the perceived risk of doing business with Venezuela.