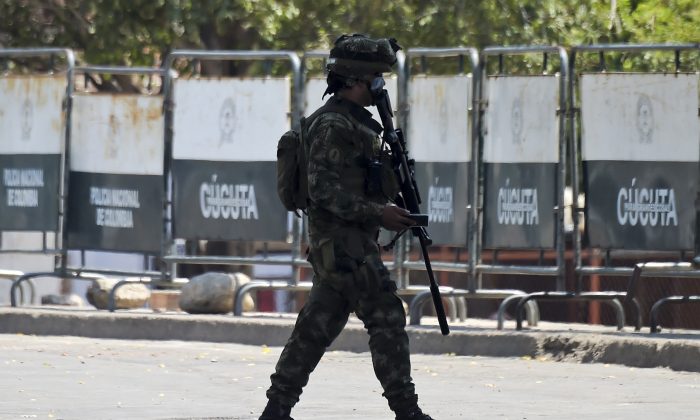 A Colombian soldier patrols the area around the the Simon Bolivar International Bridge in Cucuta, Colombia, on the border with Venezuela on Feb. 26, 2019. The Colombian government closed the area at least until midnight. (RAUL ARBOLEDA/AFP/Getty Images)
International

The gold was removed between Feb. 20 and Feb. 22 using government vehicles when no security guards were present, legislator Angel Alvarado and three other government sources said. The removal is the latest attempt by illegitimate leader Nicolás Maduro to raise hard currency amid tightening sanctions and is an indication that the embattled dictator is getting desperate.

“They plan to sell it abroad illegally,” Alvarado said.

Alvarado and the government sources, who spoke on condition of anonymity, didn’t say where the central bank was transporting the gold. They said the operation took place while central bank head Calixto Ortega was on a trip abroad.

Maduro’s regime has resorted to selling off gold after falling oil production, the country’s wider economic collapse, and mounting sanctions hit public income and made it hard for the country to access credit. Global pressure for socialist dictator Maduro to step down continues to mount.

The once-oil-rich nation has been crippled by the socialist policies implemented by Maduro and his predecessor, Hugo Chavez. Almost 90 percent of Venezuela’s population live below the poverty line and more than half of families are unable to meet their basic food needs, according to NGO Mercy Corps.

Meanwhile, the Trump administration has warned bankers and traders not to deal in Venezuelan gold. President Donald Trump was the first world leader to recognize Juan Guaidó as interim president after the Venezuelan National Assembly declared Maduro as “illegitimate.”

Trump said in a landmark speech in Florida that the United States is aware of the whereabouts of wealth hidden abroad by Venezuelan military officials and their families. Venezuelan military officials have a choice, Trump said Feb. 18: work toward democracy for the future of their families or stand to lose their wealth. He warned Maduro’s backers not to continue to back the dictator.

“If you choose this path,” Trump said, “you will find no safe harbor, no easy exit, and no way out. You will lose everything.”

In 2018, 23 tons of mined gold was transported from Venezuela to Istanbul by plane, according to sources and Turkish government data.