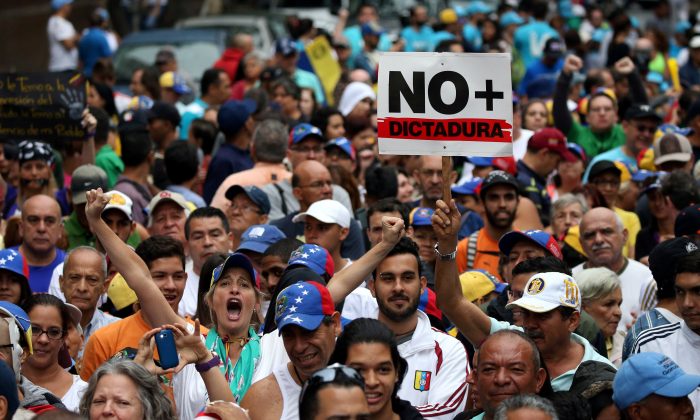 CARACAS—Venezuela’s opposition was planning protests in each of the country’s 335 municipalities on Thursday, in a bid to strain the capabilities of security forces as unrest mounted in the volatile nation.

The oil-rich but crisis-shaken South American country has been convulsed by escalating protests over the last two weeks amid a punishing economic recession and accusations that socialist President Nicolas Maduro has morphed into a dictator.

In a worrying sign for Maduro, people in usually pro-government slums and low-income areas have blocked streets and lit fires during scattered protests this week. A crowd also broke through a security cordon at his rally on Tuesday, heckling at him and throwing stones while bodyguards scrambled.

With momentum on their side, the main opposition coalition was urging Venezuelans to take to the streets across the country on Thursday in an effort to leave security forces too thinly spread to break up rallies.

They accuse police and the National Guard of indiscriminate use of tear gas, including gassing clinics and dropping canisters from a helicopter, and of arbitrarily detaining people for simply being within the vicinity of protests.

“This is a struggle of resistance, whose fundamental objective is to wear them out, and see who breaks first,” said opposition lawmaker Freddy Guevara in a video posted on Twitter.

The opposition says Maduro made it clear to the world he was a dictator when the Supreme Court in late March assumed the functions of the opposition-led congress.

Amid global outcry, the court quickly rolled back the most controversial part of its decision, but the move breathed new life into the fractured opposition movement and comforted demonstrators that they had international support.

Alongside planned opposition marches that have dissolved into clashes, there have also been what witnesses and local media describe as impromptu nighttime protests, where neighbors block streets with trash or burning debris.

Looting has been reported too, especially in the working class community of Guarenas outside Caracas.

While opposition leaders have called for protests to remain peaceful, Maduro’s government has claimed that a business-backed opposition is actually pushing for violence to justify “foreign intervention.”

Maduro has drawn parallels with a brief coup against his predecessor—the late Hugo Chavez—in 2002, and warned that an opposition government would slash social benefits like health care for the poor and subsidized food.

The opposition has responded that any social advances made under Chavez have been wiped out by a devastating economic crisis that has brought widespread shortages of food and medicine.

Some in the opposition accuse “colectivos,” militant grassroots groups whom critics say are thugs paid by the government, of looting and violence to taint the opposition.

Many Venezuelans still worry protracted protests will not bring about political or economic change, but will just increase violence in the already volatile nation.

Major anti-government protests in 2014 eventually fizzled out, though the opposition at the time had nebulous demands, poor neighborhoods largely abstained, and the economy was in better shape.

Venezuelans are gearing up for next Wednesday, when opposition leaders have called for the “mother of all marches.”