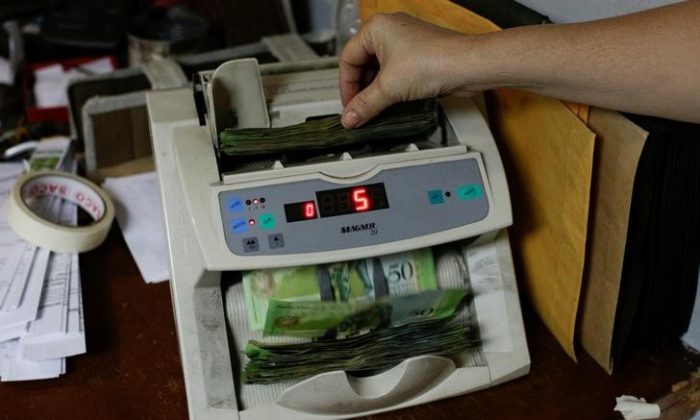 A woman uses a machine to count Venezuelan bolivar notes at an office in Caracas, Venezuela March 21, 2017. (Reuters/Marco Bello)
Americas

CARACAS—In a portend of steepening inflation in crisis-stricken Venezuela, money supply surged 10 percent in just one week earlier this month, its largest single-week rise in a quarter of a century.

Venezuela is undergoing a major economic crisis, with millions suffering food shortages, monthly wages worth only the tens of U.S. dollars, and soaring inflation—though no official data is available.

The central bank said late on Friday the total amount of local currency in circulation—known as M2 by economists—as of July 21 was 27.3 trillion bolivars, up 9.66 percent from the previous week.

Coupled with a decline in the output of goods and services, that has accelerated inflation.

While M2 may seem an obscure technical indicator, the figure was routinely published by newspapers in Venezuela, whose oil-dependent economy has been dogged by inflation in the past.

Venezuelans are forced to carry huge bundles of cash to make basic purchases—if they can afford to do so given weekly price rises on many goods.

When President Nicolas Maduro came to power in April 2013, it was at 24 per dollar.

A thousand dollars worth of local currency then would be worth just over $2 now.

The last year for which official inflation data is available from the central bank is 2015, when consumer prices rose 181 percent.