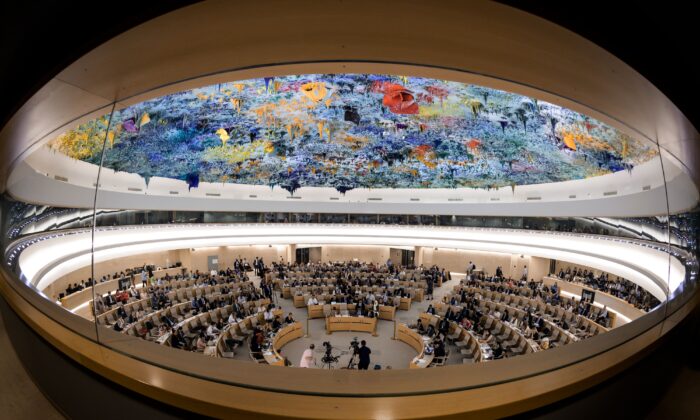 On Oct. 17, Venezuela was elected to one of the 47 United Nations Human Rights Council (UNHRC) seats by popular vote. Following the election, Venezuela’s foreign minister said, “We celebrate, once again, the Bolivarian diplomacy of peace at the U.N.”

There are two lessons to be learned from this turn of events. First, “Bolivarian peace” is defined as peace obtained through an iron-fist dictatorship, which rules against the will of the people, has no problem with widespread starvation of its population, and will kill anyone who complains or disagrees.

Venezuelan opposition leader Juan Guaidó has openly accused the Stalinist regime of Nicolás Maduro of killing a member of Guaidó’s party, Edmundo Rada. Rada’s body was found on Oct. 17, shot twice in the neck, with a bag covering his face, and partially burned; his death is likely considered a suicide by Bolivarian peace standards.

The second lesson learned is that socialist and communist regimes just simply have no sense of irony.

Two of the world’s most consistent abusers of human rights, China and Cuba, have routinely been elected to be members of the UNHRC, which is supposed to investigate allegations of human rights abuses in U.N. member states. Yet, many member countries such as Cuba, China, Venezuela, and Turkey, for example, have thousands of political prisoners sitting in jail and, in some cases, hundreds of thousands living in exile to avoid political persecution.

Unknown to most of us, the UNHRC was only established by the U.N. General Assembly in 2006. It was created to replace the U.N. Commission on Human Rights (UNCHR) because the UNCHR kept putting countries with poor human rights records on the commission. The new UNHRC has been criticized for using its authority to attack Israel and has passed more resolutions condemning Israel than the entire rest of the world combined.

In 2018, the United States withdrew its UNHRC membership, based in part on the 2017 Office of the High Commissioner on Human Rights’ eighth annual report about what happens to people who report to the U.N. on human rights violations. The report noted that a total of 29 countries persecuted people who work with the U.N. on human rights issues; nine of the countries had been elected to the UNHRC.

Unfortunately, an organization such as the United Nations, which was formed on the heels of World War II to keep world peace, has become a dismal failure, as we see with the reelection of Venezuela to the UNHRC.

The U.N. isn’t the first organization of its kind to fail. Following World War I, the League of Nations was established for exactly the same reasons and did nothing to prevent World War II. Since World War II clearly established that the League had failed, it was dissolved and later replaced by the U.N.

The process at the U.N. has brought us to the point where countries with terrible human rights records—particularly those such as Cuba, China, and Venezuela—control or influence attempts to investigate and halt the infliction of cruelty, so that these forms of social injustice can continue unabated as a method of political control.

Human nature always wins, and once again, we see that absolute power corrupts absolutely, and those in authority at the U.N. think only of their own benefits and how to expand their position of power. Let’s not forget the Oil-for-Food program scandal as another example.

The Oil-for-Food program suffered from alleged widespread corruption, and some profits were unlawfully diverted to Iraqi and other officials. In another such case, the United Nations Population Fund has been accused of providing support for programs that have promulgated forced abortions and coercive sterilizations, for what appears to be politically motivated reasons.

Instead of dealing with the real problems of the world and fulfilling the U.N.’s basic mandate of working to maintain world peace, the organization is concerned with establishing global governance and thereby giving themselves absolute power.

At an April 2018 conference in China, U.N. Secretary-General António Guterres stated, “I am deeply convinced that globalization is irreversible. Our destination must be a fair globalization that leaves no one behind as a pathway to peace and sustainable development.”

The word “fair” is clearly defined in this usage to mean everyone must participate in the system, even against their will in order to obtain peace. Or, in other words, the U.N. wants to establish a worldwide “Bolivarian peace.”