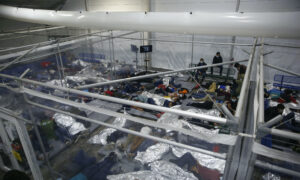 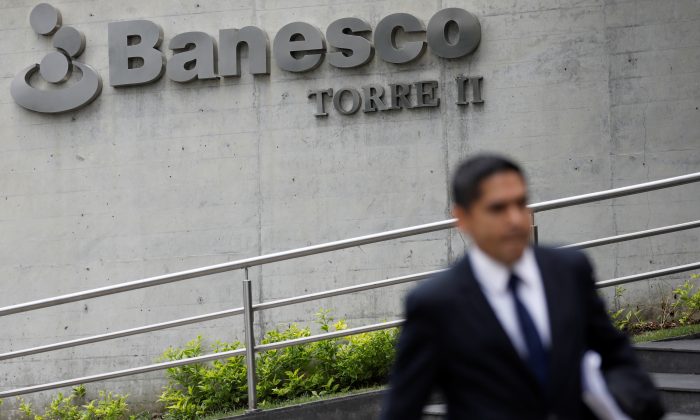 A man walks past the corporate logo of Banesco bank at one of their office complexes in Caracas, Venezuela May 3, 2018. (REUTERS/Carlos Garcia Rawlins)
Americas

CARACAS—Venezuela said on Thursday it had arrested 11 top executives of the country’s leading private bank, Banesco, for “attacks” against the OPEC country’s rapidly depreciating currency, the leftist government’s latest move against the private sector.

The detentions come on the heels of last month’s shock arrests of two Venezuelan executives working in the country for U.S. oil major Chevron .

Oil-rich Venezuela is suffering hyperinflation and a steady collapse of the bolivar currency, which President Nicolas Maduro has attributed to an “economic war” but critics blame on incompetence and failed socialist policies.

Maduro’s foes say he is cracking down on the business sector to try to shore up support and halt price increases ahead of a controversial May 20 presidential election, which main opposition parties have boycotted as a sham.

Chief Prosecutor Tarek Saab announced the arrests in a televised press conference, but did not provide evidence of wrongdoing or take questions.

Banesco’s president Juan Carlos Escotet, who lives in Spain, blasted the arrests as “disproportionate” and said he was flying to Venezuela to try to free the 11 executives, who include Chief Executive Oscar Doval.

“In the next few hours I’m taking a plane for Venezuela. We’re going to knock on every door so that this problem is cleared up and they are freed as they deserve to be,” Escotet, who was born in Venezuela to Spanish parents and holds both nationalities, said in a video posted on Twitter.

Escotet has been a frequent target of criticism by ruling party heavyweight Diosdado Cabello, who recently announced that the government was buying Banesco. Escotet denied any sale.

Escotet temporarily excused himself from his role as chairman of Galicia-based bank ABANCA, the bank said in a statement to Spain’s stock market regulator on Thursday.

Venezuela’s opposition said the arrests were another sign of Maduro’s turn to authoritarianism.

“The irresponsible government … continues to deny its responsibility in the destruction of our bolivar. Now they’re attacking Banesco. (This)… will only spawn more crisis and misery,” tweeted opposition lawmaker Carlos Valero.

Venezuela maintains exchange controls under which the government is meant to provide hard currency at a steadily weakening official rate, currently 69,000 bolivars per dollar.

But greenbacks are fetching around 800,000 on black markets, which government officials have for years harshly criticized but broadly tolerated.

Hyperinflation has turned once-powerful banks into warehouses of unwanted and mostly useless cash worth a total of only $40 million, according to a recent Reuters analysis of regulatory data.

By Corina Pons and Alexandra Ulmer