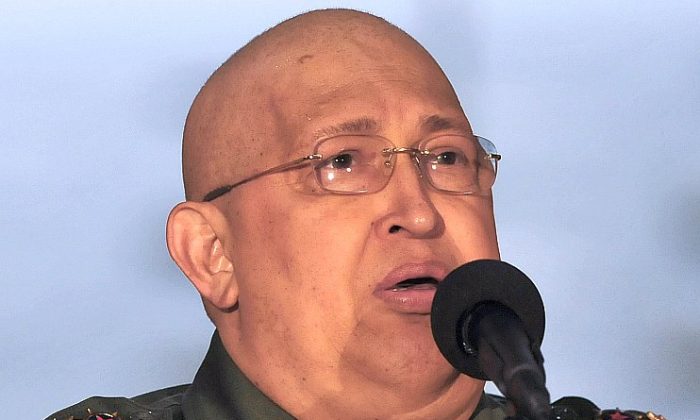 Evan Ellis is professor of national security studies, modeling, gaming and simulation with the Center for Hemisphere Defense Studies. Dr. Ellis spoke on a panel April 12, at AEI on After Hugo Chavez: China’s Strategic Advance in Venezuela. (Gary Feuerberg/The Epoch Times)
US

WASHINGTON—Hugo Chávez appears determined to control Venezuela’s future, even as he is dying of cancer, and no country would be more pleased if he could than China. Over the last several years, Beijing has taken a keen interest in keeping the Chávez regime afloat, principally to keep alive the sweetheart deals for Venezuelan oil that Chávez signed away to China.

Now, given Chávez’s compromised situation, and the tussle to fill the coming power vacuum, Venezuela is facing a complicated and potentially dangerous future and China must also decide how to play it.

Since coming to power in February 1999, Venezuelan President Hugo Chávez has campaigned against American and Western “imperialism” in Latin America. His power and popularity are built upon fiery speeches, the nationalization of strategic industries, the creation of alternative regional institutions, and an edifice of social welfare programs designed to maintain his popular support.

He has invited like-minded countries, such as Cuba, China, Russia, and Iran, into the country to displace American, European, and even local investors. Chinese financial and technical support plays a key role in keeping the regime going.

Chávez has developed an acute need for cash to maintain his programs popular with Venezuela’s poor. To earn it, he has entered into agreements that allow China to purchase Venezuelan oil well below market prices.

Over the last six to eight years, China has become a major player in Venezuela’s oil industry. Today, China imports 10 times more Venezuelan crude than it did five years ago. By contrast, the United States imports 40 percent less compared to a decade ago. In the next 10 years, China intends to double imports.

Bilateral trade between China and Venezuela has also been accelerating. Two-way trade increased from $85.5 million in 1999 to $103 billion in 2010.

“China has become Venezuela’s most important source of financial support as Chávez grapples with financial chaos of his own making, and needs to ramp up domestic spending on the eve of an election,” said Roger Noriega, who served as U.S. ambassador to the Organization of American States from 2001 to 2003. Noriega was a panelist for at the American Enterprise Institute (AEI) in Washington, D.C., on April 12 for a discussion on what China stood to lose when Chávez dies.

Beijing’s strategy has been to do what it can to ensure the oil will keep flowing in a post-Chávez future. Beijing has made major loans to Venezuela now totaling $38 billion. Those loans are all to be repaid in oil.

The very large loans that China has made to Venezuela since 2007 have been tied to future deliveries of Venezuelan oil, according to Dr. Evan Ellis, who spoke at the AEI forum. Ellis is an authority on China-Venezuela trade, and the author of “China in Latin America: The Whats and Wherefores.”

A $20 billion loan agreement reached April 2010, for example, will be paid back over 10 years in the form of 100,000 barrels of oil per day. As of June 2010, the $8 billion the Chinese regime contributed to the Venezuelan Heavy Investment Fund through China Development Bank is being repaid in oil shipments averaging 100,000 barrels per day. By 2014, Venezuela will be obligated because of Chinese loans to produce over 500,000 barrels per day, at well below market prices.

“China has contributed $24 billion to Chávez’s secretive slush fund over the past year and half,” according to AEI’s introduction to the April 12 event.

China is also loaning billions to build infrastructure to get the oil and minerals extracted and keep “the collaborative Venezuelan government in power,” says Ellis. The projects include railroads connecting the Northwest coast to the interior, port expansion (Puerto Cabella), refineries and mixing facilities, oil platforms, and mapping for mining exploration.

“As it has provided ever greater quantities of capital to the Chávez government, Beijing has become increasingly active in overseeing how the money is being used,” Ellis wrote in a brief for the Jamestown Foundation, September 2011.

The loan packages typically are being repaid in deliveries of Venezuelan oil from areas in which Chinese companies are performing the production, Ellis writes. The Chinese regime has structured the loan to minimize the risk of not being paid. Normally, a country defaults on an IMF or World Bank loan by refusing to send the money, but “for Venezuela to default on its loan from China, it would have to actively prevent China from extracting oil from Venezuela,” Ellis writes.

Beijing, of course, cannot control Chávez succumbing to cancer. With two cancer operations within a year, Chávez is fading. An election is scheduled for Oct. 7, and it is anybody’s guess what shape Chávez will be in by then.

With the future so uncertain, Beijing is calculating how best to play the situation.

Noriega writes that his sources in the Venezuelan Foreign Ministry say the Chinese are demanding new guarantees to the $4 billion loan that is being negotiated now. The Chinese want assurances that a “post-Chávez government will honor its sweetheart deals.”

The military generals, who are heavily involved in the narco-trade, are not waiting and are already treating Chávez as dead. They are plotting repressive measures against the opposition to preserve their power at all costs, says Noriega.

The opposition is united around Miranda State Gov. Henrique Capriles, who won his party’s primary convincingly in February. He said that contracts with China, Russia, and other nations would be revised to be in keeping with Venezuelan interests. Polls show that Capriles is still behind Chávez in popularity, but that may change as people realize that Chávez will not last another six-year term.

“Does China pull the plug on Chávez, knowing that the outcome would assure the ouster of Chávez?” Ellis asks. Should China make friends with the opposition, expecting they might win?