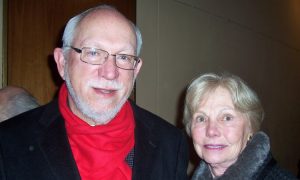 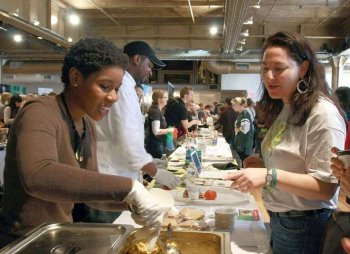 Tara Duncan of IEatGrass.com serves up 'mac and cheese' at the NYC Vegetarian Food Festival on Sunday. The 'cheese' in this vegan-friendly dish is actually made from nutritional yeast. (Tara MacIsaac/The Epoch Times)
US

The event was a milestone for the burgeoning vegetarian movement in the city, said Rynn Berry, author of “The Vegan Guide to New York City.”

“A convergence of factors—medical, nutritional, ecological, compassion for animals—has created the burgeoning movement,” he explained.

It is not the first time the city's vegans and vegetarians have come together to celebrate sans meat, Berry noted, but former festivals were not as well-organized and well-attended as Sunday's event and fizzled out after a couple of years. The U.S. Veg Corp, which organized the weekend festival, plans events that highlight nutrition and compassionate treatment of animals, and works to promote like-minded companies.

A total of 62 restaurants, food producers, and organizations were represented at the food festival. Non-dairy mint-chip ice cream, vegan marshmallows, and “mac and cheese” with all the taste but without the cheese were among the tasty tidbits in the sample trays.

When Berry first began compiling a list of the city's vegan restaurants in the mid-1990s, he only had a handful to document. Now, there are 125 vegetarian restaurants across four of the five boroughs, he reported. Manhattan hosts the most, with Brooklyn rapidly catching up.

More vegetarian restaurants are also moving into Queens, as the immigrant population creates a demand. Buddhist, Muslim, and other religious requirements often include a special diet, one without meat. The Bronx only has a “sprinkling” of vegetarian restaurants, said Berry, and Staten Island has none.

“New York is unique in that it has the greatest wealth of vegetarian restaurants in the world,” Berry explained. The tempo of life in the bustling city is one factor he feels has helped the industry to thrive here; busy New Yorkers eat out a lot.

These busy vegetarians now have an iPhone app version of “The Vegan Guide to New York City,” developed by Peter Chmiel, CEO of Cutting Edge Consulting. Smartphone users can locate vegetarian restaurants in their vicinity and filter their search results based on price, distance, and available deals.

Evolution of Vegetarianism in NYC

Being a vegetarian has changed a lot since the movement first spread to New York City.

The very first secular vegetarian society convened in Clinton Hill, Brooklyn, in 1850, noted Berry, who has written “Famous Vegetarians and Their Favorite Recipes,” a biographical account of vegetarianism featuring famous vegetarians through the ages.

Although no famous New Yorkers came to his mind, Berry said New York was nonetheless a veggie-center that drew the most famous vegetarians. William Metcalfe came from Britain to “civilize Americans, make them vegetarian,” he explained. Metcalfe was part of the Bible Christian Church, a vegetarian sect, which traveled from Manchester to Philadelphia in 1817.

Once in America, the movement quickly gravitated to the urban center, the Big Apple.

Sylvester Graham, for whom the graham cracker was named, was also among the forefathers of the vegetarian movement. His namesake was represented at the festival as part of the vegan ‘smores offered up by Sweet and Sarah.

Many sub-sects have been delineated since the vegetarian lifestyle first entered New York. Some people that fall under the vegetarian umbrella are strict raw-food vegans. On the other end of the spectrum are those whom long-time vegetarian Ted Moschones called “flexitarians”—people who occasionally eat fish or make other exceptions to the “rules.”

The NYC Vegetarian Food Festival offered a little something for everyone willing to explore meatless culinary delights. Many of the attendees, as well as the vendors, had an appreciation for food and fine cuisine that extended far beyond the simple requirement of omitting meat.