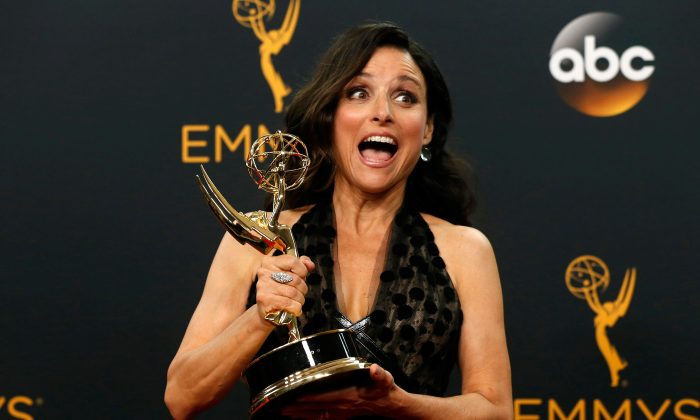 Actress Julia Louis-Dreyfus poses backstage with her award for Outstanding Lead Actress In A Comedy Series for her role in HBO's "Veep" at the 68th Primetime Emmy Awards in Los Angeles, California on Sept. 18, 2016. (REUTERS/Mario Anzuoni/File Photo)
Entertainment

‘Veep’ and the Art of Nailing Washington Politics, Trump or Not

NEW YORK—”Veep” returns to HBO next week with a defeated female president painfully navigating her way back to public life after a year nursing her wounded psyche.

Satirizing Washington politics is getting harder for the award-winning TV comedy but the new season, starting April 16, has an uncanny knack for nailing current U.S. politics—and it does not even have a Trump-like figure.

Executive producer David Mandel says writing on the sixth season of “Veep” started in June 2016, well before Democrat Hillary Clinton lost her bid in November to become the first woman in the White House.

Any comparison to Clinton’s stunning change in circumstances is an “accidental coincidence,” he says.

“The overall plan to have (“Veep” character) Selina Meyer lose the tied election and have her become a former president who is desperately trying to remake her reputation in the world all goes back two years. It has nothing to do with Hillary losing,” said Mandel.

Nevertheless said Mandel “it’s getting sort of frightening” how closely the series about a political system where idealism is trumped by compromise tends to echo real Washington politics.

“Sometimes when we sit around to come up with a storyline, we think ‘What’s the stupidest thing a president could do? What’s the worst thing a president’s press secretary could say?’ and right now some of those things seem to be happening on a daily basis,” said Mandel.

Presidential memoirs, corruption in the former Soviet state of Georgia, sperm donation, the U.S. debt ceiling, payments for speeches and cheating spouses are just some of the topics this season as the vainglorious Meyer (Julia Louis-Dreyfus) tries to worm her way back into public life.

The arrival of Republican businessman Donald Trump in the actual White House has not changed the underlying premise of the series, which launched in 2012 before President Barack Obama won his second term.

“We’re not changing the show and trying to figure out how to do Trump. We’re doing a show about power in Washington D.C., the people that crave it and how frighteningly sometimes stupid and incompetent they can be. Right now that is lining up very well,” said Mandel.

When it came to losing power, “Veep” had plenty of advice. Writers spoke with Republican Mitt Romney, who lost out in two presidential elections, and to a former aide of President George H.W. Bush, who was defeated in 1992 by Bill Clinton after one term.

Authenticity is key to the success of “Veep,” which has won two best comedy series Emmy awards and five Emmys for Louis-Dreyfus, whose character started out as a vice-president who the president never calls.

The show’s characters never reveal their party affiliations, so despite the barbed jokes, it has a thriving audience in Washington D.C., said Mandel.

“Whenever we meet people from whichever party, they think ‘Veep’ is about the other guys.”