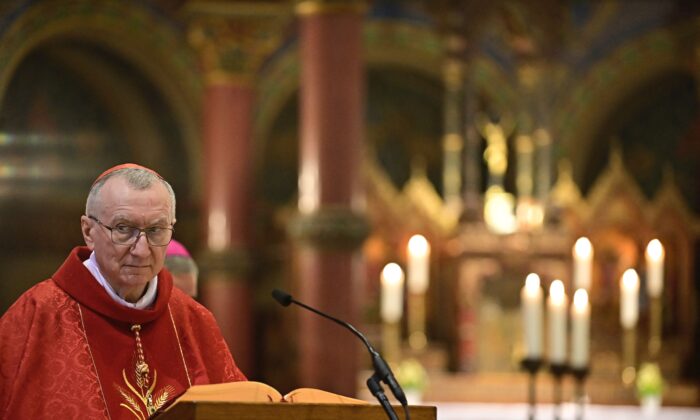 Commentator: A first step in the complete annihilation of HK's remaining freedom of belief
By Nie Law

Vatican Secretary of State Pietro Parolin said the Holy See has plans to relocate its Hong Kong office to Beijing, amid a recent report that the CCP authorities had earlier refused Pope Francis’ suggestion to meet CCP leader Xi Jinping. Frank Xie, an expert on China issues and a tenured professor at the University of South Carolina’s Aiken School of Business, said that the CCP’s refusal to see the Pope is its way of showing it has the upper hand (in dealing with the Holy See). From the office relocation plan, two things become apparent. First, it is one more sign that the Vatican is trying to appease the CCP; and second, it is a prelude to the complete annihilation of the last free beliefs that Hong Kong people still enjoy.

The widely circulated Italian newspaper Il Messaggero reported on Sept. 16 that Parolin mentioned in a media interview during a visit to Kazakhstan recently, that the Holy See had always proposed to move its office in Hong Kong to Beijing and did not agree that it was a new idea. It is not yet realized only because there has been no response from Beijing to date about the proposal.

If the Hong Kong office were to move to Beijing, it would be the first time a quasi-diplomatic channel for dialogue was re-established by the Vatican after the CCP severed diplomatic relations in 1951.

Professor Xie criticized the Vatican’s plan to move the Hong Kong office to Beijing as “outrageous,” believing that it is further appeasing the CCP and succumbing to the CCP’s rude demands. It is also “a prelude to a complete annihilation of what remains as the last freedom of belief and its trust in God.”

The Catholic News Agency (CNA) reported on Sept. 19 that the delegation, as of today, is not an embassy, ​​which brings less of a burden to the Vatican. If the Vatican wants to set up an embassy in mainland China, it must close the embassy in Taipei and cut off diplomatic relations with Taiwan.

The Vatican maintains diplomatic relations with the government of the Republic of China in Taiwan. The Italian newspaper Corriere della Sera quoted an anonymous senior Vatican diplomat as saying in October 2021 that the CCP asked the Holy See to first cut off exchanges with Taiwan in order to establish diplomatic relations with China. The Holy See demanded to “set up an embassy in Beijing” before talking about the Taiwan-Vatican relationship. The CCP did not agree to the demand and failure to reach an agreement on the issue brought the situation to a standstill.

Prediction: Religious Freedom Will Not Exist in HK for Long

The Vatican is still seeking closer ties with the CCP and is eager to relocate its Hong Kong office to Beijing, a move quite different from the views of the previous Charge d’Affaires in Hong Kong.

Reuters reported on July 5, 2022, that Monsignor Javier Herrera-Corona, the former Vatican Charge d’Affaires in Hong Kong, warned before leaving office in March that the Catholic Church in Hong Kong would, in the future, be subject to restrictions similar to those imposed on religious groups in mainland China and that the years of freedom they had enjoyed are over. He said, “Change is coming, and you’d better be prepared,” “Hong Kong is not the great Catholic beachhead it was,” reported Reuters.

The source said that at the time, Herrera’s concerns went beyond the authorities’ crackdown in the name of the “Hong Kong National Security Law (NSL)” and warned that Hong Kong’s integration with the mainland would lead to “mainland-style restrictions on religious groups.”

On the other hand, the report also mentioned that before the NSL was implemented in 2020, Herrera and other envoys had begun to transfer more than half a ton of files from Hong Kong to Rome in 2019, partly through friendly diplomatic connections. The files contain details of private correspondence with underground clergy in mainland China, missionary activities, and the persecution of Catholics from the mid-1980s onwards. The report quoted a “Catholic cleric familiar with the situation” as saying that the Vatican envoy first feared that this mission would be closely scrutinized and uncovered by the Chinese state security agencies, but in the end, the files were successfully moved.

Recently, Pope Francis and CCP leader Xi Jinping were both in Kazakhstan for different activities. The Pope sought to meet with Xi while there, but the Chinese authorities refused the request, saying Xi did not have time.

According to Xie’s analysis, the CCP’s rudeness and indifference shown by refusing to meet with Pope Francis are probably due to the fact that it is not satisfied with the Vatican’s concessions on the appointment of bishops, and continues to “ask for more control.”

The landmark event of the relationship between the CCP and the Vatican in recent years can be traced to a secret agreement signed by the two parties at the end of September 2018—a two-year provisional agreement on the appointment of bishops. The details of the agreement are secret, but it is generally known that it was an agreement to allow the co-appointment of bishops by the CCP and the Holy See in mainland China. The agreement is renewed every two years. When it was renewed in 2020, Parolin proclaimed that the agreement “helps Chinese believers to have a normal religious life.” He also clarified that he refused to interpret the agreement in a political light and said that China’s human rights and religious freedom issues could not be dealt with in haste.

Cardinal Joseph Zen Ze-kiun, bishop emeritus of the Catholic Church in Hong Kong, publicly accused Parolin of controlling the Pope at the time. In an exclusive interview with The Epoch Times, he said, “The upper echelon in the Holy See pushed this compromise policy,” adding that Parolin “is not for faith at all, but maybe just for vanity. I don’t know if there are other secret deals with the CCP, I don’t know about this.” Zen also said that Parolin may have his own agenda as he defends the agreement even though he knows the CCP is evil.

Zen published a lengthy article in English on Oct. 9 in 2020, blasting Secretary of State Parolin’s speech as “sickening,” and pointed out that Parolin was by no means stupid or ignorant, but was just lying through his teeth, accusing him of being not just a shameless liar but also daring.

Zen: Parolin Controls the Pope and Compromises With the CCP

Zen also pointed out at the time that in the two years since the agreement was reached, China’s persecution of believers has intensified, including the disappearance of underground churches and the prohibition of minors under the age of 18 from entering churches and participating in religious activities. The so-called “Sinicization of Catholicism” has turned Catholicism into the “religion” of the Communist Party, with the state and the Party as the leader.

Cardinal Zen was born in Shanghai in 1932, before the establishment of communist-ruled China, and fled to Hong Kong at the age of 16. In 2006, he was promoted to a Roman Catholic priest-level cardinal, the second person in the Hong Kong Diocese to receive this honour. On May 11, 2022, he was arrested by the National Security Department of the Hong Kong Police for his involvement in the “612 Humanitarian Relief Fund.”

Professor Xie said that under Pope Francis, the Vatican “continuously communicated with the CCP in secret, which is deviating from the teachings of Catholicism and the expectations of the Catholics in the world.” He also criticized the CCP as an anti-human, anti-religious, and anti-God tyranny. “As the spiritual leader of all Catholics in the world, how can he join the CCP and allow CCP officials and a group of atheist gangsters to participate in and appoint bishops at all levels?” He believes that the Vatican ignores the CCP’s suppression of true believers in God in mainland China and the blasphemy of Catholic teachings by the false Catholic Church controlled by the CCP.  “The constant contacts and negotiation with the CCP are really shocking,” he said.

Xie also compared the Pope’s attitudes toward Xi Jinping and Cardinal Zen: “The Vatican refused to see Bishop Joseph Zen of Hong Kong, leaving the elderly Cardinal Zen to wait for days without seeing the Pope, while at the same time it stooped to the level of the Chinese Communist Party leader to ask for an audience. It is really saddening.”

For reference, in 2020, Cardinal Zen went to the Vatican alone on Sept. 23 to ask to see the Pope during the prime of the pandemic, but he waited for four days to no avail. Zen said the idea of ​​the Holy See renewing the bishop appointment agreement with the CCP is “crazy,” like “dancing with the devil.” Many Italian media also joined in and spoke for him.

As for the possibility of the establishment of diplomatic relations between China and the Vatican, Xie said that during the term of Pope Francis, there is a growing possibility that it will happen. “If it happens, it will be a tragedy for Catholicism, a day when the freedom of belief in Hong Kong will be buried, and Catholicism in Taiwan will suffer grave consequences.”

The Catholic Church in Hong Kong has also been suspected of being influenced by the CCP in recent years. On Jan. 3, 2019, Bishop Michael Yeung Ming-cheung of the Catholic Diocese of Hong Kong passed away, and the post of bishop was left vacant for 28 months. During this period, the Vatican appointed Emeritus Cardinal John Tong Hon as the Apostolic Administrator of the diocese. At that time, it was known that the Holy See originally proposed Auxiliary Bishop Joseph Ha Chi-shing to take over as bishop. But as Ha was known to have repeatedly shown his support of the anti-extradition movement, it was believed that the Holy See had come under political pressure to appoint the Beijing-favoured Reverend Choy Wai Man, the vice bishop of the Hong Kong diocese, as the Ordinary Bishop. In the end, however, the Pope appointed a Jesuit priest, Father Stephen Chow Sau-yan to succeed the post of Bishop of Hong Kong.